Poets Tess Taylor and Judy Halebsky read from their new collections--in a graveyard! Click here to watch the video of this reading. 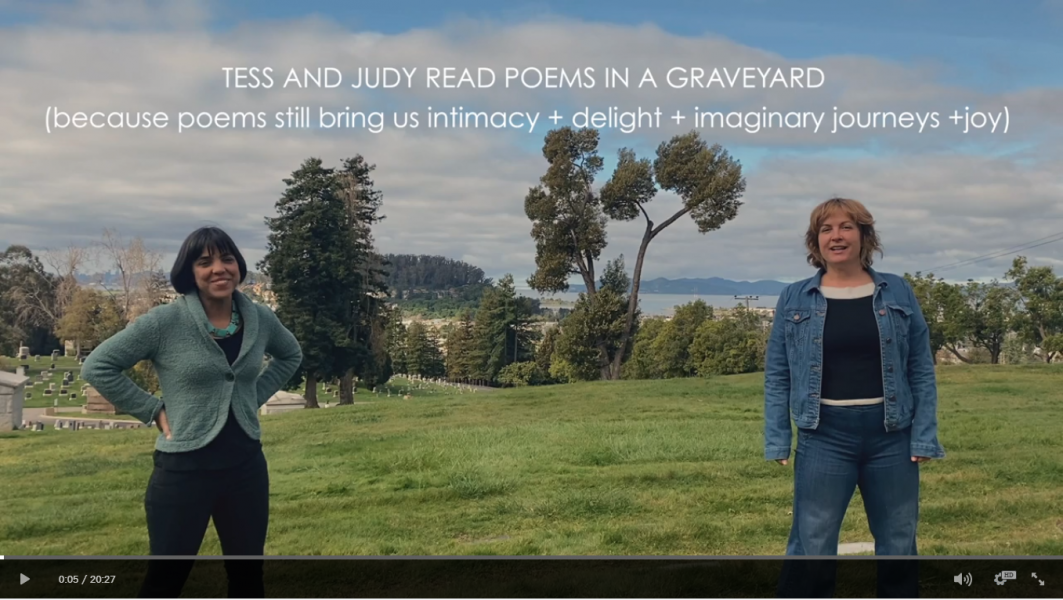 Rift Zone, Taylor's much-anticipated third book traces literal and metaphoric fault lines--rifts between past and present, childhood and adulthood, what is and what was. Circling Taylor's hometown--an ordinary California suburb lying along the Hayward fault--these poems unearth strata that include a Spanish land grant, a bloody land grab, gun violence, valley girls, strip malls, redwood trees, and the painful history of Japanese internment.

Taylor's ambitious and masterful poems read her home state's historic violence against our world's current unsteadinesses--mass eviction, housing crises, deportation, inequality. They also ponder what it means to try to bring up children along these rifts. What emerges is a powerful core sample of America at the brink--an American elegy equally tuned to maternal and to geologic time. At once sorrowful and furious, tender and fierce, Rift Zone is startlingly observant, relentlessly curious--a fearsome tremor of a book.

In Last West, poet Tess Taylor follows Dorothea Lange's winding paths across California during the Great Depression and in its immediate aftermath. On these journeys, Lange photographed migrant laborers, Dust Bowl refugees, tent cities and Japanese American internment camps. Taylor's hybrid text collages lyric and oral histories against Lange's own journals and notebook fragments, framing the ways social and ecological injustices of the past rhyme eerily with those of the present. The result is a stunning meditation on movement, landscape and place.

"Scintillatingly rendered by Taylor as conversation, meditation, road trip, and vivid documentary account, Last West tracks the not-so-distant past into the erupting present, taking on as many poetic forms as there are California topographies." -Forrest Gander, Chancellor of the American Academy of Poets and winner of the 2019 Pulitzer Prize for Poetry

About Judy Halebsky's Spring and a Thousand Years

Finalist, 2020 Miller Williams Poetry Prize
A translator’s notebook, an almanac, an ecological history, Judy Halebsky’s Spring and a Thousand Years (Unabridged) moves between multiple intersections and sign systems connected in a long glossary poem that serves as the book’s guide to what is lost, erased, or disrupted in transition both from experience to written word and from one language, location, and time period to another.