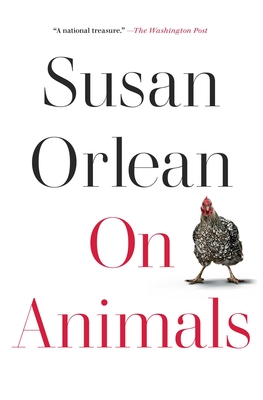 “Pick up On Animals and you’ll find yourself delighting in the fascinating world of donkeys, orca whales, dogs, and pigeons. A lifelong animal lover, Orlean has crafted essays that are beautifully written and frankly quite delightful.”
— Rachel Watkins, Avid Bookshop, Athens, GA

Susan Orlean—the beloved New Yorker staff writer hailed as “a national treasure” by The Washington Post and the author of the New York Times bestseller The Library Book—gathers a lifetime of musings, meditations, and in-depth profiles about animals.

“How we interact with animals has preoccupied philosophers, poets, and naturalists for ages,” writes Susan Orlean. Since the age of six, when Orlean wrote and illustrated a book called Herbert the Near-Sighted Pigeon, she’s been drawn to stories about how we live with animals, and how they abide by us. Now, in On Animals, she examines animal-human relationships through the compelling tales she has written over the course of her celebrated career.

These stories consider a range of creatures—the household pets we dote on, the animals we raise to end up as meat on our plates, the creatures who could eat us for dinner, the various tamed and untamed animals we share our planet with who are central to human life. In her own backyard, Orlean discovers the delights of keeping chickens. In a different backyard, in New Jersey, she meets a woman who has twenty-three pet tigers—something none of her neighbors knew about until one of the tigers escapes. In Iceland, the world’s most famous whale resists the efforts to set him free; in Morocco, the world’s hardest-working donkeys find respite at a special clinic. We meet a show dog and a lost dog and a pigeon who knows exactly how to get home.

Susan Orlean has been a staff writer at The New Yorker since 1992. She is the New York Times bestselling author of seven books, including The Library Book, Rin Tin Tin, Saturday Night, and The Orchid Thief, which was made into the Academy Award–winning film Adaptation. She lives with her family and her animals in Los Angeles and may be reached at SusanOrlean.com and on Twitter @SusanOrlean.

“Every essay in the book is magnificent. . . . Part of what makes this book so immensely readable is the coupling of a brilliant essayist’s friendly, funny voice with a committed generalist’s all-embracing curiosity. There appears to be nothing in the world that doesn’t interest Orlean, and she has such a companionable way of conveying her fascinations that readers can’t help being fascinated too. . . . [Orlean] is a writer who sees crucial connections between animals and people. This emphasis on interconnectedness emerges not just from one essay after another but also from the cumulative effect of the collection as a whole. Even more than the linguistic pyrotechnics, the friendly wit or the mesmerizing storytelling, that’s the true gift of On Animals.”
—Margaret Renkl, The New York Times Book Review

“Original, perceptive, and clever . . . Orlean excels as a reporter. . . . Her pages are crammed with quirky characters, telling details, and flabbergasting facts. Readers will find these pages full of astonishments. . . . Even though Orlean claims the animals she writes about remain enigmas, she makes us care about their fates. Readers will continue to think about these dogs and donkeys, tigers and lions, chickens and pigeons long after we close the book’s covers.”
—Sy Montgomery, Boston Globe

“Beguiling, observant, and howlingly funny . . . Beware: Cuddling up with On Animals is even more absorbing than watching a bear rummage through a Tahoe kitchen on YouTube.”
—Rachel Levin, San Francisco Chronicle

“A close read of her new book suggests that beneath the surface variety of subjects and locales in her writing, there’s an underlying unity: heedless, headlong enthusiasm. . . . She is a moth drawn to moths who are drawn to the flame. . . . Ms. Orlean has a rare knack for finding these people, and an even rarer one for starting them talking. . . . Do not underestimate her curiosity, or the sharpness of her eyes.”
—Jeremy McCarter, The Wall Street Journal

“Spectacular . . . One is likely to imagine Susan Orlean’s eyes sparkling as she composed the essays in On Animals. . . . Orlean strikes a perfect balance between hilarious and informative. . . . Orlean has a gift for the indelible detail. . . . Readers fond of seemingly effortless writing about animals will savor this book.”
—Minneapolis Star Tribune

“She relies on her powers of observation, conveyed with unflappable curiosity. . . . Orlean is committed to investigating the dizzying multiplicity of roles animals serve—employee, best friend, harbinger of climate change—and the places where those functions intersect.”
—Margaret Wappler, Los Angeles Times

“A broad meditation on how the connections we make, or fail to make, with animals mark us profoundly along our human journey . . . Orlean’s tone is conversational and self-questioning.”
—USA Today (4 out of 4 stars)

“Fabulously fun . . . Orlean is such a virtuoso of unexpected joys and delights that she can make even the story of a lost dog read like a thriller. . . . Orlean’s high-octane enthusiasm never wanes. . . . Orlean’s readers will find themselves completely diverted by On Animals’ irresistible menagerie.”
—BookPage (starred review)

“Vibrant . . . A revelry for readers wild for animals . . . Orlean’s deep pleasure in learning startling facts, her often wry tales about her personal life, her omnivorous attention to detail, and her juggler’s skill with words yield vivid, provocative, amusing, and wondrous stories.”
—Booklist

PRAISE FOR THE LIBRARY BOOK:

“Moving . . . A constant pleasure to read . . . Everybody who loves books should check out The Library Book. . . . Orlean, a longtime New Yorker writer, has been captivating us with human stories for decades, and her latest book is a wide-ranging, deeply personal, and terrifically engaging investigation of humanity’s bulwark against oblivion: the library. . . . As a narrator, Orlean moves like fire herself, with a pyrotechnic style that smolders for a time over some ancient bibliographic tragedy, leaps to the latest technique in book restoration, and then illuminates the story of a wildly eccentric librarian. Along the way, we learn how libraries have evolved, responded to depressions and wars, and generally thrived despite a constant struggle for funds. Over the holidays, every booklover in America is going to give or get this book. . . . You can’t help but finish The Library Book and feel grateful that these marvelous places belong to us all.”
—Ron Charles, The Washington Post