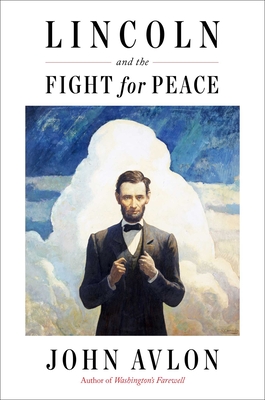 A groundbreaking, revelatory history of Abraham Lincoln’s plan to secure a just and lasting peace after the Civil War—a vision that inspired future presidents as well as the world’s most famous peacemakers, including Nelson Mandela, Mahatma Gandhi, and Martin Luther King, Jr. It is a story of war and peace, race and reconciliation.

As the tide of the Civil War turned in the spring of 1865, Abraham Lincoln took a dangerous two-week trip to visit the troops on the front lines accompanied by his young son, seeing combat up close, meeting liberated slaves in the ruins of Richmond, and comforting wounded Union and Confederate soldiers.

The power of Lincoln’s personal example in the closing days of the war offers a portrait of a peacemaker. He did not demonize people he disagreed with. He used humor, logic, and scripture to depolarize bitter debates. Balancing moral courage with moderation, Lincoln believed that decency could be the most practical form of politics, but he understood that people were more inclined to listen to reason when greeted from a position of strength. Ulysses S. Grant’s famously generous terms of surrender to General Robert E. Lee at Appomattox that April were a direct expression of the president’s belief that a soft peace should follow a hard war.

While his assassination sent the country careening off course, Lincoln’s vision would be vindicated long after his death, inspiring future generations in their own quests to secure a just and lasting peace. As US General Lucius Clay, architect of the post-WWII German occupation, said when asked what guided his decisions: “I tried to think of the kind of occupation the South would have had if Abraham Lincoln had lived.”

Lincoln and the Fight for Peace reveals how Lincoln’s character informed his commitment to unconditional surrender followed by a magnanimous peace. Even during the Civil War, surrounded by reactionaries and radicals, he refused to back down from his belief that there is more that unites us than divides us. But he also understood that peace needs to be waged with as much intensity as war. Lincoln’s plan to win the peace is his unfinished symphony, but in its existing notes, we can find an anthem that can begin to bridge our divisions today.

John Avlon is a senior political analyst and anchor at CNN. He is an award-winning columnist and the author of Independent Nation, Wingnuts, and Washington’s Farewell. Previously, he was the editor-in-chief and managing director of The Daily Beast and served as chief speechwriter for the Mayor of New York during the attacks of 9/11. He lives with his wife Margaret Hoover and their two children in New York.

A Best Book of 2022 by Foreign Affairs and Vanity Fair

"In this elegant, almost conversational, exposition of Lincoln the 'soulful centrist,' the 16th president appears as the reconciler in chief, who not only saved democracy from destruction in war but also pointed the way to saving it from inertia and futility in peace. And, Avlon believes, the Lincolnian example could be a similar balm for our political wounds today...To read these chapters is to discover Lincoln’s rare compound of 'empathy, honesty, humor and humility.' ...These are not unfamiliar tales to students of Lincoln, but Avlon makes the retelling affecting and powerful." — The New York Times Book Review

"In these dark times, it can be hard to even imagine what good, let alone great, national leadership looks like. That’s what makes Avlon’s account of Abraham Lincoln’s plan to win the peace after winning the Civil War so important... A tour de force... brims with astonishing details plucked from the vast library of historical facts." — Vanity Fair (A Best Book of the Year)

"Avlon’s highly readable, original treatment of President Abraham Lincoln’s tragically interrupted plans to advance political reconciliation in the wake of the U.S. Civil War is particularly timely now in a polarized United States and world." — Foreign Affairs (A Best Book of the Year)

"A tour de force... brims with astonishing details plucked from the vast library of historical facts." — Vanity Fair (A Best Book of the Year)

"Avlon’s durable faith in Lincoln offers a boost of confidence at a time when our history, instead of uniting us, has become yet another battleground. With insight, he chooses familiar and lesser-known Lincoln phrases to remind readers how much we still have to learn from our 16th president... As Lincoln understood, the work of democracy at home is indispensable to the work of peace abroad. It is reassuring to have the case for each restated so cogently." — The Washington Post

“Powerful and sublimely written... His enduring belief in the power of love and charity to move humanity forward is a legacy that belongs not just to the United States but to the world.” — The Washington Independent Review of Books

“Avlon is a master of the art of finding the universal in the particular. He sheds new light on the most tangled questions of our history, not least the tragedy of Reconstruction. With its graceful prose and wise insights, this is an important and absorbing contribution to the literature of the American Presidency.” — Jon Meacham, Pulitzer Prize-winning and #1 New York Times bestselling author of The Soul of America

“A stunning accomplishment, and an essential reminder that the Civil War – the most important event in our country’s history – is very much part of who we are as a people and a nation today.” — Ken Burns, Academy Award nominated documentary filmmaker

“Carefully researched, persuasively written, and thoroughly relevant to our times. This is a reminder that Lincoln left a blueprint that provides a path forward to more harmonious relations with each other and with the rest of the world. ” – Edna Greene Medford, Ph.D., Associate Provost for Faculty Affairs and Professor of History at Howard University

“Very timely. Lincoln and the Fight for Peace provides us hope, bringing history and visionary leadership alive. This speaks directly to what we most need in our current toxic polarization, applicable for every level of leadership and citizen engagement.”— John Paul Lederach, author of The Moral Imagination: The Art and Soul of Building Peace

“Anyone who has watched John Avlon unleash his Reality Check commentaries weekday mornings on CNN knows that the broadcaster can be tenacious even as he advocates for justice and fairness. So, Avlon argues in this compelling new book, was Abraham Lincoln, the peace-loving leader who waged the bloodiest war in our history. Avlon is an insightful historian, as demonstrated by his 2017 triumph, Washington’s Farewell: The Founding Father’s Warning to Future Generations....Having written of the last days of the Union’s founder, Avlon now turns his attention to the last days of the Union’s savior. The result is another superbly researched and convincingly argued page turner.” – Harold Holzer, award-winning historian and Chairman of the Lincoln Forum

“Revelatory... Vividly told and expertly researched, this inspiring history draws on Lincoln’s example to chart 'a path away from violent polarization and toward reconciliation in defense of democracy.'” — Publishers Weekly

"A solid exploration of Lincoln’s clear intention to create a firm peace after the Civil War... A rich, readable historical study of Lincoln’s thinking, which remains timely."— Kirkus Reviews