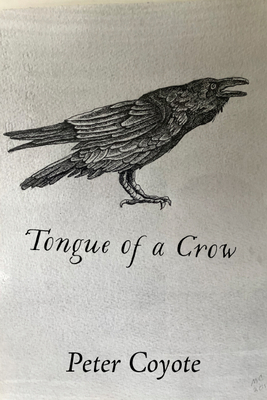 Peter Coyote’s first collection of poetry takes us on a whirlwind tour of an eclectic and exciting life as an actor and Zen Buddhist priest, meandering from love affairs to marriage to divorce to the Sixties to psychedelic spirituality and beyond.  Written over several decades, these poems read as a collage, each piece distinct and contributing to a cohesive lyric narrative.

An accomplished actor in more than 130 films, Coyote is an Emmy Award-winning narrator of over 200 documentaries and 17 audiobooks. He has written two best-selling memoirs, Sleeping Where I Fall and The Rainman’s Third Cure, and contributed to other books and publications. Coyote is a politically engaged person who has championed a multitude of causes. He is also a songwriter, guitarist, singer and Buddhist priest. This is his first poetry collection. Coyote lives in northern California.

“Peter Coyote’s new book Tongue of a Crow is incandescent. At first read, his poems are all energy—kinetic universes exploding or imploding, line by line; transformation engines charged with immediacy, sometimes edgy, sometimes elegiac: ‘[m]ixing his mother’s ashes / with birdseed, elbow-deep/in a galvanized pail, / swishing the whispering / seed with ghostly flour, pollinating each grain/with her smoky voice and pearls.’ A Ferris
wheel turns at the center of this book, the Big Wheel, and you sense the depth at the core, the apprehension of transience. Utterly personal and specific, these poems channel the impermanence in which we all live and die, not knowing why we love our suffering, certain only that ‘the world is burning.’”
—D. Nurkse

“Pete’s first poetry collection is a knockout. It reveals the same keen intelligence and wry perspective he showed in his two memoirs, with an eloquent, unique style that lays bare the universal in the deeply personal. He can add gifted poet to his already impressive resume.”
—Bonnie Raitt

“Peter Coyote’s poems are every bit as wonderful as his memoirs, rich and lively, sweet and perplexed, full of sorrow and laughter, love and lovers, soul and bodies, Zen and wild mother nature, truth, hope, disappointment, resurrection; ie, Life with a capital L.”
—Anne Lamott