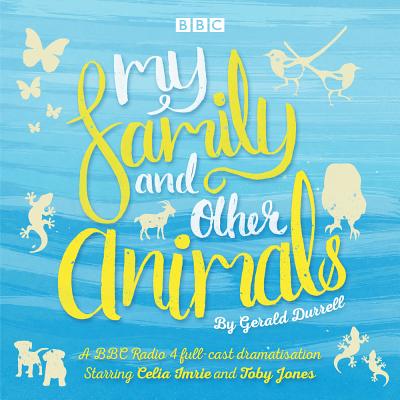 Celia Imrie and Toby Jones star in this BBC Radio 4 dramatization of Gerald Durrell's much-loved comic gem. "My Family and Other Animals "is the classic tale of naturalist Gerald Durrell's magical 1930s childhood on pre-war Corfu. His descriptions of his eccentric family and his encounters with the local creatures are full of humor and charm, and the book has delighted readers of all ages for 60 years. Ten-year-old Gerry is the youngest member of the Durrell family, which also consists of Mother, pompous eldest son Larry, gun-mad second son Leslie, acne-ridden sister Margo, and Roger the dog. When they arrive in Corfu, Gerry is thrilled to find a paradise of exotic wildlife to be explored. Soon he is embarking on natural history expeditions, swimming in the clear blue sea, and befriending the island's inhabitants.Gerry's relatives are less impressed with his exploits, especially when his burgeoning animal collection sparks chaos at the family's Christmas party . . . With a specially created soundtrack, this vivid adaptation takes the story out of the studio and into the Greek wilderness that enthralled Durrell the young naturalist. Duration: 2 hours approx.

Gerald Durrell, OBE (1925 1995) was an English naturalist, zookeeper, conservationist, author, and television presenter. He founded what is now called the Durrell Wildlife Conservation Trust and the Jersey Zoo (now Durrell Wildlife Park), but is perhaps best remembered for writing a number of books based on his life as an animal collector and enthusiast."