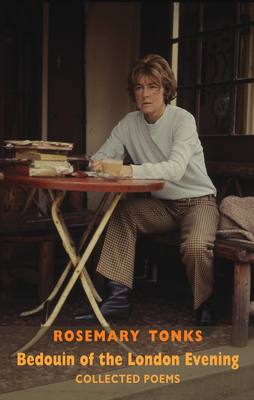 The "disappearance" of the poet Rosemary Tonks in the 1970s was one of the literary world's most tantalising mysteries - the subject of a BBC feature in 2009 called The Poet Who Vanished. After publishing two extraordinary poetry collections - and six satirical novels - she turned her back on the literary world after a series of personal tragedies and medical crises which made her question the value of literature and embark on a restless, self-torturing spiritual quest. This involved totally renouncing poetry, and suppressing her own books. Interviewed earlier in 1967, she spoke of her direct literary forebears as Baudelaire and Rimbaud: 'They were both poets of the modern metropolis as we know it and no one has bothered to learn what there is to be learned from them...The main duty of the poet is to excite - to send the senses reeling.'

Her poetry - published in Notes on Cafes and Bedrooms (1963) and Iliad of Broken Sentences (1967) - is exuberantly sensuous, a hymn to sixties hedonism set amid the bohemian nighttime world of a London reinvented through French poetic influences and sultry Oriental imagery. She was 'Bedouin of the London evening' in one poem: 'I have been young too long, and in a dressing-gown / My private modern life has gone to waste.'

All her published poetry is now available here for the first time in over 40 years, along with a selection of her prose. This second edition has an expanded introduction and an additional prose piece.

Rosemary Tonks (1928-2014) was a colourful figure in the London literary scene during the 1960s. She published two poetry collections, Notes on Cafes and Bedrooms (Putnam, 1963) and Iliad of Broken Sentences (The Bodley Head, 1967), and six novels, from Opium Fogs (1963) to The Halt During the Chase (1972), wrote for The Observer, The Times, The New York Review of Books, The Listener, The New Statesman and Encounter, and presented poetry programmes for the BBC. Following the death of her mother, a crisis of religious faith, her divorce and nearly losing her sight, she renounced literature, suppressed her own books, left London for Bournemouth and cut herself off from family and friends. After travelling to Jerusalem in 1981 to be baptised by the River Jordan, she created a new identity for herself, her whereabouts known only to family. Thought to be living somewhere as a recluse, she was in fact continuing to inhabit cafes and parks, and was active as a silent, often solitary evangelist working outside any church, giving out Bibles in London and Bournemouth. In 2009 she was the subject of Brian Patten's BBC radio documentary The Poet Who Vanished. All her published poetry was made available for the first time in over 40 years in Bedouin of the London Evening: Collected Poems, published by Bloodaxe Books in October 2014. This edition also includes a small selection of her prose. A second edition with an expanded introduction and an additional prose piece was issued in 2016.