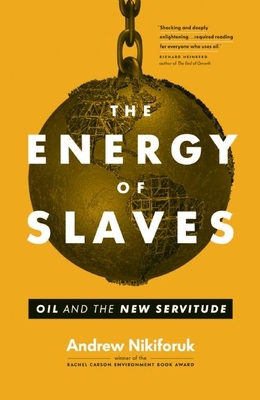 Ancient civilizations routinely relied on shackled human muscle. It took the energy of slaves to plant crops, clothe emperors, and build cities. In the early 19th century, the slave trade became one of the most profitable enterprises on the planet. Economists described the system as necessary for progress. Slaveholders viewed religious critics as hostilely as oil companies now regard environmentalists. Yet the abolition movement that triumphed in the 1850s had an invisible ally: coal and oil. As the world's most portable and versatile workers, fossil fuels replenished slavery's ranks with combustion engines and other labor-saving tools. Since then, oil has changed the course of human life on a global scale, transforming politics, economics, science, agriculture, gender, and even our concept of happiness. But as best-selling author Andrew Nikiforuk argues in this provocative book, we still behave like slaveholders in the way we use energy, and that urgently needs to change. Cheap oil transformed the United States from a resilient republic into a global petroleum evangelical, then a sickly addict. Modern economics owes its unrealistic models to fossil fuels. On the global stage, petroleum has fueled a demographic explosion, turning 1 billion people into 7 billion in just a hundred years.

Published in Partnership with the David Suzuki Institute.

Andrew Nikiforuk is an award-winning Canadian journalist who has written about education, economics, and the environment for the last two decades. His books include Pandemonium; Saboteurs: Wiebo Ludwig's War against Oil, which won the Governor General's Literary Award for Nonfiction; The Fourth Horseman; and Tar Sands, which won the Rachel Carson Environment Book Award and became a national bestseller. His most recent book, Empire of the Beetle, was nominated for the Governor General's Literary Award for Non-Fiction and selected as a top book of the year by both The Globe and Mail and Amazon. He lives in Calgary, Alberta.

"In this cogently argued book, Andrew Nikiforuk deploys a powerful metaphor. Oil dependency, he writes, is a modern form of slavery-and it's time for a global abolition movement" Taras Grescoe, author of Bottomfeeder

"A startling critique that should rouse us from our pipe dream of endless plenty." Ronald Wright, author of A Short History of Progress

"Our overwhelming societal dependence on oil is usually discussed in economic terms. This book looks at our Promethean petro-prowess through an ethical lens, and the result is both shocking and deeply enlightening. This is required reading for everyone who uses oil (do you know anyone who doesn't?)." Richard Heinberg, Senior Fellow, Post Carbon Institute, and author of The End of Growth and The Party’s Over.

"Nikiforuk tallies the human and ecological costs of bark beetles' destruction of wide swathes of trees, costs that are exacerbated by climate change. His plainspoken writing style is especially poignant as he gives voice to the devastating human experience of lost forests. Recommended." Library Journal, Oct 1, 2011

""Nikiforuk leavens this tragic, instructive history with curious facts about the complex, intelligent insect ...[his] florid language, affection for the beetles, and scorn for the humans in his story...lighten the tone of what in other hands could be an overwhelmingly depressing topic." Publishers Weekly

"...an eye-opener, not just about how much damage bark beetles are doing but on how much humans have laid the table for the bugs' banquet." The Commercial Dispatch, Oct 26, 2011

"Nikiforuk draws on interviews with scientists, foresters and rural residents to paint a nuanced picture of beetle outbreaks and their long-term implications." Science News, Oct 7, 2011

""A terrific book on a terrifying subject. Andrew Nikiforuk is the first person to put this ominous New World catastrophe into such vivid context. Empire of the Beetle is a chilling, fascinating, and important contribution to our understanding of a rapidly changing world." John Vaillant, author of The Tiger

"Read this book, be entertained, be ashamed, and then do something to stop the insanity.... This book is a slashing indictment of politicians in the back pockets of energy megacorporations, of regulators cowed into acquiescence, and of all of us who look the other way as we fill our gas tanks." Thomas Homer-Dixon, author of The Upside of Down

"Passionate and forcefully argued, Tar Sands is a wake-up call not just to Canadians but to the wider world to take a serious look at what is happening in northern Alberta. To call this book a polemic is a compliment." Margaret MacMillan, author of Paris 1919

"Nikiforuk offers a scathing critique of what he calls the corporate greed and regulatory indifference that have attended development of Canada's vast oil patch"-"Green Inc.," The New York Times