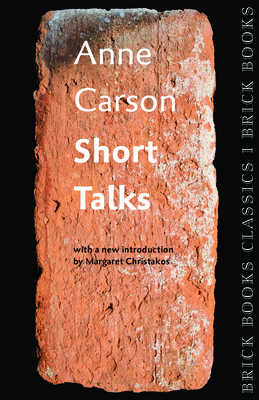 On the occasion of the press's 40th anniversary, Brick Books is proud to present the first of six new editions of classic books from our back catalogue. This new edition of Short Talks features a foreword by the poet Margaret Christakos, a ?Short Talk on Afterwords? by Carson herself, and a new cover and design by the renowned typographer Robert Bringhurst.

First issued in 1992, this is Carson's first and only collection of poems published with an independent Canadian press. It announced the arrival of a profound, elegiac and biting new voice. Short Talks can comfortably stand alongside Carson's other bestselling and award-winning works.

The youth at night would have himself driven around the scream. It lay in the middle of the city gazing back at him with its heat and rosepools of flesh. Terrific lava shone on his soul. He would ride and stare. Short Talk on the Youth at Night?

Praise for Short Talks: ?Short Talks is a unique form of slag-like poetic address that arises from the full formative force of Carson's young embodiment of a northern Ontario mining-town winter of mind. Margaret Christakos, from the Introduction.

Anne Carson was born in Canada and teaches ancient Greek for a living. A former MacArthur Fellow, awards for her numerous books include the T.S. Eliot Prize and The Los Angeles Times Book Prize. Red Doc> was recently awarded the Griffin Poetry Prize and the inaugural Folio Prize.