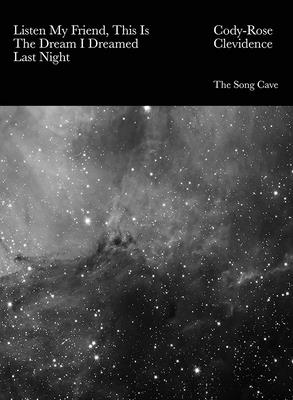 A glorious and hypnotically capitvating unspooling of thought and concern from poet Cody-Rose Clevidence. Too tightly controlled to be considered stream-of-consciousness, this book-length monologue (?), prayer (?), love letter (?), pinned me to my seat. It's an utterly compelling, tender, and full of life.

Poetry. Literary Nonfiction. LGBTQIA Studies. Unlike anything we've ever seen or published; LISTEN MY FRIEND; THIS IS THE DREAM I DREAMED LAST NIGHT is a book of wonder in which poet Cody-Rose Clevidence layers the language of information with the language of the heart; constantly locating the connections between attention and perception. On each page local and global concerns combine in an effort to reveal what it's like to live right now; during a pandemic in a broken world. With its uncategorizable form; somewhere between an essay and a prose poem; Clevidence mixes anthropology; poetry; autobiography; history; psychology; and philosophy; with subject matter ranging from agriculture; gender; justice; loneliness; pollution; space; guns; moths; family; grief; longing--it's hard to name a subject relevant to our time that isn't in this book. Clevidence's deft movement between facts and feelings is immediate from the first page; with an inquisitive and searching voice stretched over one long; never-breaking block of prose; a catalogue that becomes revelatory by the end; allowing readers to imagine a new way of processing their world.