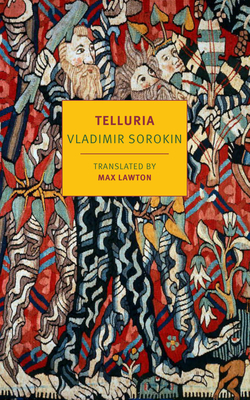 In the warring, neo-feudal society of this cross-genre novel for fans of Cormac McCarthy and William Gibson, the greatest treasure is a dose of tellurium—a magical drug administered by a spike through the brain.

Telluria is set in the future, when a devastating holy war between Europe and Islam has succeeded in returning the world to the torpor and disorganization of the Middle Ages. Europe, China, and Russia have all broken up. The people of the world now live in an array of little nations that are like puzzle pieces, each cultivating its own ideology or identity, a neo-feudal world of fads and feuds, in which no one power dominates. What does, however, travel everywhere is the appetite for the special substance tellurium. A spike of tellurium, driven into the brain by an expert hand, offers a transforming experience of bliss; incorrectly administered, it means death.

The fifty chapters of Telluria map out this brave new world from fifty different angles, as Vladimir Sorokin, always a virtuoso of the word, introduces us to, among many other figures, partisans and princes, peasants and party leaders, a new Knights Templar, a harem of phalluses, and a dog-headed poet and philosopher who feasts on carrion from the battlefield. The book is an immense and sumptuous tapestry of the word, carnivalesque and cruel, and Max Lawton, Sorokin’s gifted translator, has captured it in an English that carries the charge of Cormac McCarthy and William Gibson.

Vladimir Sorokin was born in a small town outside of Moscow in 1955. He trained as an engineer at the Moscow Institute of Oil and Gas but turned to art and writing, becoming a major presence in the Moscow underground of the 1980s. His work was banned in the Soviet Union, and his first novel, The Queue (available as an NYRB Classic), was published by the famed émigré dissident Andrei Sinyavsky in France in 1985. In 1992, Sorokin’s Their Four Hearts was short-listed for the Russian Booker Prize; in 1999, the publication of the controversial novel Blue Lard, which included a sex scene between clones of Stalin and Khrushchev, led to public demonstrations against the book and demands that Sorokin be prosecuted as a pornographer; in 2001, he received the Andrei Bely Award for outstanding contributions to Russian literature. His work has been translated into more than thirty languages. Sorokin is also the author of the screenplays for Moscow, The Kopeck, and 4, and of the libretto for Leonid Desyatnikov’s The Children of Rosenthal, the first new opera to be commissioned by the Bolshoi Theater since the 1970s. He has written numerous plays and short stories, including the O. Henry Award winner “Horse Soup,” which will appear in Red Pyramid, a volume of stories forthcoming from NYRB Classics. His most recent novel is Doctor Garin. He lives in Vnukovo and Berlin.

Max Lawton is a novelist, musician, and translator. His translations of Sorokin’s stories have appeared in The New Yorker and n+1. In addition to eight of Sorokin’s books, forthcoming from NYRB Classics and Dalkey Archive Press, he is translating two books by Jonathan Littell. He lives in New York City.

"Sorokin is both an incinerator and archaeologist of the forms that precede him: a literary radical who’s a dutiful student of tradition, and a devout Christian whose works mercilessly mock the Orthodox Church. It’s this constant oscillation between certainty and precarity, stability and chaos, beauty and devastation, homage and pastiche, plenitude and rupture that makes Sorokin’s fiction unique." —Aaron Timms, The New Republic

"Sorokin is funny. His phantasmagoric tapestry seethes with bizarre libidinal energies that leave nothing un-desecrated. . . Like an antidote to this linguistic prison, Telluria unleashes lexical anarchy. Vladimir Sorokin pledges allegiance to language by obliterating it entirely." —Allison Bulger, Words Without Borders

"Vladimir Sorokin’s 2013 novel Telluria, in its first English translation thanks to the estimable talents of Max Lawton, is one of the best contemporary novels I’ve read in a long time." —Edwin Turner, Biblioklept

"Sorokin is a moralist in the misanthropic spirit of Swift, attacking his era’s social and political life through the medium of fantastical tales set in speculative futures. The subversion of totalitarianism is hardwired into every word he writes, but in a provocatively improper way. . . . Sorokin the moralist is intent on attacking the corruption of language and thought, as much as violations of the social contract, by laying bare the inauthenticity of these self-deceiving declarations that go unchallenged in their context." —Victoria Nelson, The TLS

"A shrewd novelist. Sorokin crafts absurdly dystopic satires, ones that are so demented, so obscene, so blasphemous, and so visceral in its representation of Russian and Soviet existence that they force us to consider humanity’s devotion to mass insanity. . . . Sorokin is also always ahead, frighteningly so." —Arya Roshanian, Gawker


"Telluria is as much a feast for the senses as it is the mind. Its 50 idiosyncratic chapters — varying greatly in style and voice — unfold kaleidoscopically into a single, giant and multi-dimensional tapestry. Like a painting by Hieronymus Bosch, Telluria is stuffed with a carnival of characters. . . . Prescient. As more of his works become available to English-speaking audiences, we will soon learn what other futures Sorokin has prophesied." —Matthew Janney, Financial Times

"One of the cornerstones of Sorokin’s second period, Telluria. . . is perhaps the most fully articulated vision of Sorokin’s New Medieval aesthetic universe. The English-speaking world has already been treated to two works in this cycle, Day of the Oprichnik and The Blizzard. . . and while those books have already become modern classics, neither matches Telluria’s towering narrative ambition and mind-boggling stylistic diversity. . . . a high-concept feat of world-building that captures a capacious sociological portrait of Sorokin’s brave new world . . . Telluria pummels its readers with a such a dazzling kaleidoscope of shifting narratives and fantastic images, it is almost as if the book itself is a hallucinogenic tellurium nail." —Ben Hooyman, Los Angeles Review of Books

"Telluria. . . is a dystopian fable set in the near future, as Europe has devolved into medieval feudal states and people are addicted to a drug called tellurium. Through the smokescreen of a twisted fantasy teeming with centaurs, robot bandits and talking dogs who eat corpses, Sorokin smuggles in a sly critique of contemporary Russia’s turn toward totalitarianism." —Alexandra Alter, New York Times

“Telluria describes a time when comprehensive visions have failed. Heterogeneous societies have crumbled.  The world no longer tolerates diversity. The very idea of grand unifying politics, an ‘end of history,’ seems ridiculous. Pluralism, as an ideal, or even as a concept, has disappeared. Members of one society, social class, or economic stratum have little incentive or opportunity to interact with others.” —Bradley Gorski, Public Books