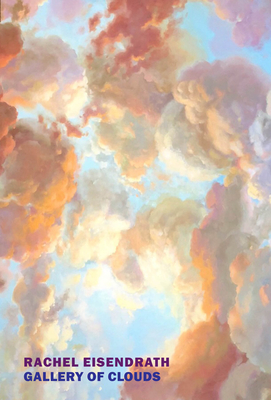 Gallery of Clouds is an associatively linked collection of essays (or clouds, as she puts it) touching on any number of topics, including the pastoral tradition, the meaning of home, and the essay form itself. Erudite without ever being anything less than charming, the book is an absolute delight that rewards its readers with brilliant insights on nearly every page.

A personal and critical work that celebrates the pleasure of books and reading.

Largely unknown to readers today, Sir Philip Sidney’s sixteenth-century pastoral romance Arcadia was long considered one of the finest works of prose fiction in the English language. Shakespeare borrowed an episode from it for King Lear; Virginia Woolf saw it as “some luminous globe” wherein “all the seeds of English fiction lie latent.” In Gallery of Clouds, the Renaissance scholar Rachel Eisendrath has written an extraordinary homage to Arcadia in the form of a book-length essay divided into passing clouds: “The clouds in my Arcadia, the one I found and the one I made, hold light and color. They take on the forms of other things: a cat, the sea, my grandmother, the gesture of a teacher I loved, a friend, a girlfriend, a ship at sail, my mother. These clouds stay still only as long as I look at them, and then they change.”

Gallery of Clouds opens in New York City with a dream, or a vision, of meeting Virginia Woolf in the afterlife. Eisendrath holds out her manuscript—an infinite moment passes—and Woolf takes it and begins to read. From here, in this act of magical reading, the book scrolls out in a series of reflective pieces linked through metaphors and ideas. Golden threadlines tie each part to the next: a rupture of time in a Pisanello painting; Montaigne’s practice of revision in his essays; a segue through Vivian Gordon Harsh, the first African American head librarian in the Chicago public library system; a brief history of prose style; a meditation on the active versus the contemplative life; the story of Sarapion, a fifth-century monk; the persistence of the pastoral; image-making and thought; reading Willa Cather to her grandmother in her Chicago apartment; the deviations of Walter Benjamin’s “scholarly romance,” The Arcades Project. Eisendrath’s wondrously woven hybrid work extols the materiality of reading, its pleasures and delights, with wild leaps and abounding grace.

Rachel Eisendrath is a critic and scholar who specializes in English Renaissance poetry. The author of Poetry in a World of Things (winner of the 2019 Elizabeth Dietz Award), she is the Tow Associate Professor of English and director of the Medieval and Renaissance Studies Program at Barnard College in New York City.

“From an early age, reading provided Eisendrath with solidity and engagement, a means of inhabiting her own mind ‘with a pose of sufficient complexity and suppleness that it felt real and also could whir along with a certain lightness.’ Her observations appear in episodic fashion, though her erudition and perceptiveness are no pose. She is a gifted stylist, finding surprise around every corner.” —Kirkus Reviews

“Rachel Eisendrath's Gallery of Clouds reads like strings of improvised images in the margins of Sir Philip Sidney's Elizabethan romance Arcadia. Or a diary at times inspired by her muse Virginia Woolf and elevated to an urban essay on the English Renaissance, European art, failed American pastoral dreams, and the dissonances of modernity. Eisendrath's illuminating sketches—wise, changeable, compassionate—resemble Constable's watercolor sky studies with transitory Turneresque bursts of sun between.” —Susan Howe

“‘What is this mysterious harmony that a lamp has with a book? It is as if the lamp knew and shared in the silence that lies at the heart of the book, beneath all the eager little words.’ So writes Rachel Eisendrath in this transporting marvel of a book, a wide-ranging demonstration of the art of making thought out of dreamy inquiry and reflection. An underground spring in the book—if such can be said of a gallery of clouds!—is a deft, unforgettable portrait of the child and the girl the author was who dwell so delightedly in her still, avid for insight and all the crucial refreshment that beauty, literature and art bring to life. I’ll be sharing Gallery of Clouds with lucky friends starting now and for the rest of my life.” —Alice Quinn

“Gallery of Clouds is a rare and singular achievement. An ecstatic meditation on Sir Philip Sidney’s Arcadia, it is also a space—one concise and yet vast, precise and yet its effects are indeterminable—where subtle echoes between gestures in art and literature are revealed and attended to by an exceptional mind. Rachel Eisendrath is a close and astute reader who possesses great learning and vivid gifts, all of which she wears lightly. Her ideas are communicated with eloquent clarity and directness. Her authority is powered by doubt and a restless searching, one troubled by timeless questions concerning the meaning of things, the uncertainty of those meanings, and the fleeting and connected nature of life. Soon one realises that what is taking place here is a sort of an experiment in living and reading. With such acute lucidity and intellectual elegance, Eisendrath has mapped out an unlikely geography of feeling and ideas that culminates into a passion for the life of the mind and the life of books.” —Hisham Matar

“Eisendrath works partly to illuminate Sidney’s famous but rarely read 16th-century romance, and partly to examine what retrospection is and what it (and also literature) might be for. Her title speaks to the floating, mutable quality of thought. . . Clouds (like those painted on the ceiling of the New York Public Library’s Rose Reading Room, which also grace the cover of this book) bridge the gap between divine and daydream. . . . Reading becomes our temporary escape—our own arcadia. And, via its strangeness, we expand out of the selves we thought we knew. We find new inner coastlines.” —Tess Taylor, The Wall Street Journal

“[An] exquisite book . . . Ask, with Eisendrath, these questions: How do you write about a life whose great romance is reading? And how do you dramatize the intensity of those parts of life that have nothing to show for themselves by way of event or action? . . . . [In Gallery of Clouds,] Eisendrath marks her resistance to the idea that ‘intellectual life and wellbeing are two separable things.’” —Rebecca Ariel Porte, Los Angeles Review of Books

“[A] brief but intense meditation on the pastoral form, Philip Sydney and all the ways we find ourselves reconfigured by reading books. . . . Benjamin once wrote, ‘What for others are deviations are, for me, the data which determine my course.’ It is also true of Eisendrath herself. . . . [Gallery of Clouds] is esoteric and discursive, a book of questions that cannot be answered, that elude us with the inconstancy of clouds.” —David L. Ulin, The Los Angeles Times

“Eisendrath’s book is filled with critical intelligence. . . Gallery of Clouds exhibits a loose structure, following the whims of association rather than the rules of academic argumentation. There are lovely asides on the magic of seminar discussion, on Eisendrath’s introduction to rhythm and its relation to style through childhood games of double-dutch, on reading at night by lamplight.” —Anthony Domestico, Commonweal

“An uncategorizable, virtuoso performance . . . [Gallery of Clouds is a book] told in the form of a dream manuscript, read by a dream-version Virginia Woolf, whom the author meets sitting with friends in Central Park; a manuscript shot through with reflections that are autobiographical, philological, book-historical.” —Nicholas Dames, Public Books