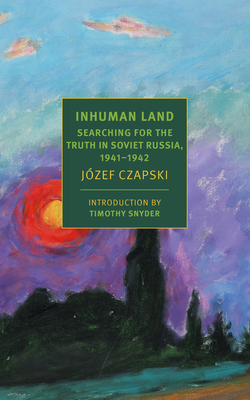 A classic work of reportage about the Katyń Massacre during World War II by a soldier who narrowly escaped the atrocity himself.


In 1941, when Germany turned against the USSR, tens of thousands of Poles—men, women, and children who were starving, sickly, and impoverished—were released from Soviet prison camps and allowed to join the Polish Army being formed in the south of Russia. One of the survivors who made the difficult winter journey was the painter and reserve officer Józef Czapski.

General Anders, the army’s commander in chief, assigned Czapski the task of receiving the Poles arriving for military training; gathering accounts of what their fates had been; organizing education, culture, and news for the soldiers; and, most important, investigating the disappearance of thousands of missing Polish officers.
Blocked at every level by the Soviet authorities, Czapski was unaware that in April 1940 many officers had been shot dead in Katyn forest, a crime for which Soviet Russia never accepted responsibility.
Czapski’s account of the years following his release from the camp and the formation of the Polish Army, and its arduous trek through Central Asia and the Middle East to fight on the Italian front offers a stark depiction of Stalin’s Russia at war and of the suffering, stoicism, and bravery of his fellow Poles. A work of clear observation and deep compassion, Inhuman Land is one of the twentieth century’s indispensable acts of literary witness.

Józef Czapski (1896–1993), a painter and writer, and an eyewitness to the turbulent history of the twentieth century, was born into an aristocratic family in Prague and grew up in Poland under czarist domination. After receiving his baccalaureate in Saint Petersburg, he went on to study law at Imperial University and was present during the February Revolution of 1917. Briefly a cavalry officer in World War I, decorated for bravery in the Polish-Bolshevik War, Czapski went on to attend the Academy of Fine Arts in Kraków and then moved to Paris to paint. He spent seven years in Paris, moving in social circles that included friends of Proust and Bonnard, and it was only in 1931 that he returned to Warsaw, and began exhibiting his work and writing art criticism. When Germany invaded Poland in September 1939, Czapski was mobilized as a reserve officer. Captured by the Germans, he was handed over to the Soviets as a prisoner of war, though for reasons that remain mysterious he was not among the twenty-two thousand Polish officers who were summarily executed by the Soviet secret police. Czapski described his experiences in the Soviet Union in several books: Memories of Starobilsk (forthcoming from NYRB), Inhuman Land, and Lost Time (available from NYRB), the last of which reconstructs a lecture he gave to his fellow prisoners about Proust’s In Search of Lost Time. Unwilling to live in postwar communist Poland, Czapski set up a studio outside of Paris. His essays appeared in Kultura, the leading intellectual journal of the Polish emigration that he helped establish; his painting underwent a great final flowering in the 1980s. Czapski died, nearly blind, at ninety-six. Almost Nothing: The 20th-Century Art and Life of Józef Czapski, a biography of Czapski by Eric Karpeles, was published by New York Review Books.


Antonia Lloyd-Jones is the 2018 winner of the Transatlantyk Award for the most outstanding promoter of Polish literature abroad. She has translated works by several of Poland’s leading contemporary novelists and writers of reportage, as well as crime fiction, poetry, and children’s books. She is a mentor for the Emerging Translator Mentorship Programme and former co-chair of the Translators Association of the United Kingdom.

Timothy Snyder is the Richard C. Levin Professor of History at Yale and a permanent fellow of the Institute for Human Sciences in Vienna. He is the author of several works of European history, including Bloodlands, winner of the American Academy of Arts and Letters Literature Award, the Hannah Arendt Prize, and the Leipzig Book Prize. His most recent books are On Tyranny and The Road to Unfreedom.

"This gentle, tenacious, adamantine figure has been far too little known in the West—until now. New York Review Books recently published a moving and strikingly original biography by Eric Karpeles, Almost Nothing: The 20th-Century Art and Life of Józef Czapski; a new translation by Antonia Lloyd-Jones of Inhuman Land: Searching for the Truth in Soviet Russia, 1941-42; and Mr. Karpeles’s translation of Czapski’s Lost Time: Lectures on Proust in a Soviet Prison Camp. Together these books document Czapski’s physical and spiritual survival during a nightmare era, but, more than that, they re-create an overlooked life, one marked by an exemplary measure of modesty, moral clarity and artistic richness. Moreover, Mr. Karpeles, a California-based painter and art critic, has ignited international interest in Czapski’s artwork.” —Cynthia Haven, The Wall Street Journal

"The Polish painter and writer Józef Czapski lived through almost the entire twentieth century as an exception to the rule. A pacifist who became a Polish army officer being deported to a Soviet prison camp in 1939, he was one of very few to survive the Katyn massacre perpetrated by Stalin’s secret police the following year....He was both a patriot and a European in the deepest sense, with friends and family connections across the continent. In this year’s centenary of independence regained, a new generation of Poles in a country at the crossroads must decide whether Czapski’s vision will also be theirs." —Stanley Bill, Times Literary Supplement

“Inhuman Land is a gripping and heartrending depiction of the Soviet Union at war in the years 1941–43. Equipped with a perfect knowledge of Russian, Józef Czapski was able to describe the USSR in all its cruel complexity, alert both to the brutality of Soviet power and the generosity of ordinary Russians. Here Czapski reveals himself as one of the great witnesses of the twentieth century.” —Anka Muhlstein