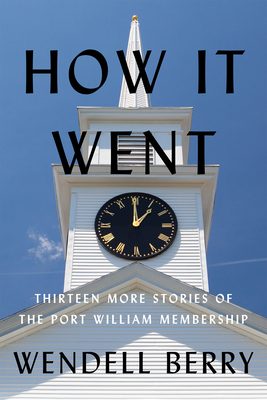 This is book number 12 in the Port William series.

For those readers of his poetry and inspired by his increasingly vital work as advocate for rational land use and the right-size life, these stories of Wendell Berry's offer entry into the fictional place of value and beauty that is Port William, Kentucky. Berry has said it's taken a lifetime for him to learn to write like an old man, and that's what we have here, stories told with grace and ease and majesty. Wendell Berry is one of our greatest living American authors, writing with the wisdom of maturity and the incandescence that comes of love.

These thirteen new works explore the memory and imagination of Andy Catlett, one of the well-loved central characters of the Port William saga. From 1932 to 2021, these stories span the length of Andy’s life, from before the outbreak of the Second World War to the threatened end of rural life in America.

WENDELL BERRY, an essayist, novelist, and poet, has been honored with the T. S. Eliot Prize, the Aiken Taylor Award in Modern American Poetry, the John Hay Award of the Orion Society, and the Dayton Literary Peace Prize Richard C. Holbrooke Distinguished Achievement Award, among others. In 2010, he was awarded the National Humanities Medal by President Barack Obama, and in 2016, he was the recipient of the Ivan Sandrof Life Achievement Award from the National Book Critics Circle. Berry lives with his wife, Tanya Berry, on their farm in Henry County, Kentucky.

"Wendell Berry is an American literary treasure . . . A misty melancholy hangs over every page of this novel. But Berry's powers as a writer render that heartbroken tone beautiful. Berry is a master craftsman in all literary genres. No extra word or shabby sentence mars his work. The reader pauses often to admire the crystalline precision of his writing . . . Let us hope we also can embrace Berry's quiet celebration in this work and others of how people can learn to get along when they share a community. Though he writes almost exclusively of times past, Berry is a powerful writer for our time." —Pamela Miller, Star Tribune (Minneapolis)

"Berry’s powers as a writer render [the] heartbroken tone beautiful. Berry is a master craftsman in all literary genres. No extra word or shabby sentence mars his work. The reader pauses often to admire the crystalline precision of his writing." —Pamela Miller, The Daily News

"New stories like those in How It Went add context, depth, and breadth to Port William. They tell us, once again, the kinds of work we can do to help mend a hurt world. Go read them." —Ethan Mannon, Front Porch Republic

"Berry’s stories effortlessly portray characters who feel as real as they do distant—members of a bygone era, of a harder yet simpler time when things revolved around real life, not the abstractions of our modern age. Despite being in the past, they are not simply 'products of their times.' Berry is careful to construct his characters as close to real flesh and blood as possible, illustrating that the virtues of stability, community, and a life well lived are as desirable and possible today, in any town or city, as they were and are in Port William . . . With a mix of good humor and piercing insight into the human condition, Berry examines the inner life of Andy Catlett—and a great deal more. Never forceful, Berry makes his points nonetheless. Andy is learning to navigate the challenges of a changing world, some times with more grace than others. Along the way, we can learn something too." —Dr. Ryan Hanning, Hearth and Field

"This is a work of essential American literature." —Booklist (starred review)

"Lovingly written . . . Taken together, the 13 chapters in Wendell Berry’s How It Went create a tale that gently unwinds and doubles back on itself, not so much like a river but more like a flowering vine . . . Berry’s prose—in How It Went and just about everything else he’s written over his long career—is imbued with compassion . . . A book full of such gentleness, wisdom and humility seems preposterous in this day and age. It’s also something of a miracle. We are lucky, in such times, to still have a writer like Wendell Berry." —BookPage (starred review)

"Lyrical, immersive stories about work, neighbors, and the land . . . Berry has that gift for entertaining amid serious intent, and the many lighter, very human moments in his elegiac, cautionary, wistful stories keep them from sinking into jeremiad without diminishing his message. A fine collection by an enduring, endearing master." —Kirkus Reviews (starred review)

"Many profound lessons are found in these nostalgic pages . . . Followers of the author’s previous work will no doubt love this florilegium, but no doubt this anthology has something for everyone. A solid collection from a dependable author, for fans and nonfans alike." —Library Journal

"Berry’s humanity and clear-eyed intelligence steer the stories away from simple nostalgia and into a thoughtful analysis of how communities inevitably change over time. This accomplished author still has much to offer." —Publishers Weekly