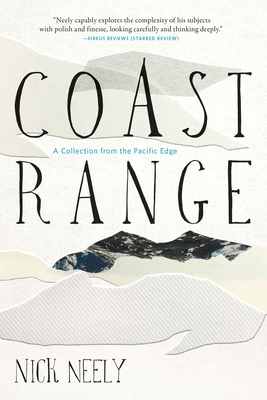 Coast: the edge of land, or conversely the edge of sea. Range: a measure between limits, or the scope or territory of a thing. Coast Range, the debut collection of essays from writer Nick Neely, meticulously and thoughtfully dwells on these intersections and much more. The book's title refers to the region in which these essays are set: the California and Oregon coastal ranges. In deeply moving prose equal parts exhilarating and pensive, each essay explores an iconic organism (a few geologic), so that, on the whole, the collection becomes a curiosity cabinet that freshly embodies this Pacific Northwest landscape.

But the book also employs a playful range of forms. Just as forest gives way to bluff and ocean, here narrative journalism adjoins memoir and lyric essay. These associative, sensuous, and sometimes saturnine pieces are further entwined by the theme of "collecting" itself—beginning with a meditation on the impulse to gather beach agates, a semiprecious stone. Another essay follows the journey of salmon from their "collection" at a hatchery through a casino kitchen to a tribal coming–of–age ceremony; a third is a flitting exploration of hummingbirds.

Nick Neely grew up south of San Francisco, in the oak and chaparral on the bay side of the Santa Cruz Mountains. He holds an MA in Literature and the Environment from the University of Nevada, Reno, and MFAs in nonfiction and poetry from Hunter College and Columbia University. He is the author of two books, Alta California and Coast Range. His nonfiction has appeared in magazines such as Orion, Audubon, Mother Jones, High Country News, Kenyon Review, The Threepenny Review, The Georgia Review, and Ecotone. He is a recipient of PEN/Northwest's Margery Davis Boyden Wilderness Writing Residency, a UC Berkeley–11th Hour Food and Farming Journalism Fellowship, and the 2015 John Burroughs Nature Essay Award. He lives in Hailey, Idaho, with his wife, the painter Sarah Bird.

"Neely is a graceful, subtle writer with a sharp eye for the easily missed details of his surroundings."—Outside Online

"These are nature essays with a difference: the sureness and delicacy with which Nick Neely directs our attention from the miracles of the outer world to the gyroscopic peculiarities of his consciousness make for a very satisfying reading experience." —Phillip Lopate, author of To Show and Tell and The Art of the Personal Essay

"Welcome a strong new voice for the silver beaches, pine forests, and shining rivers of the Pacific Northwest. Like the agates in his pockets, Nick Neely's essays are highly polished, translucent, but shot through with hard veins of natural science. Imagine Wallace Stegner in conversation with Ed Ricketts, when they are both young and still astonished. Then you can begin to understand the creativity, the power, the beauty, and the fun of Coast Range." —Kathleen Dean Moore, author of Great Tide Rising

"What a superb writer Nick Neely is and just the kind of natural history observer we need in a time of fierce change. He enlivens chiton, newt, hummingbird in the sapling outside the Safeway, and more, with keen eyes and ears, quick veers of mind and syntax, and an abiding sense of the connection between the wild and the made worlds. Precise, gorgeous and imaginatively wed to both science and myth, his rendering of Coyote brings the creature smack–dab into twenty–first–century America, as soul–troubling as ever he was in myth and landscape. A fine collection to read and savor." —Alison Hawthorne Deming, author of Zoologies and The Edges of the Civilized World

"What makes Neely's collection so compelling is the detail, his artful engagement of our senses to feel the weight of the agate, taste the flake of the fish, trace the letters carved into the madrone trees, and then smell the sour decay of atonement and fall in love with this place." — Orion

"Neely poetically and introspectively guides our attention to things we might not notice or might not know, his curiosity and wonder driving each story along with his splendid powers of observation, plus a bit of research . . . Each piece feels like an adventure, an opportunity to appreciate the world, a tiny mystery solved." —Missoula Independent

"Neely's vigilant, wry commentaries on his native patch of the west coast are not only in the tradition of Thoreau's Walden but in an older and wider one that he shares with Thoreau: what Thoreau calls 'the great–dragon Tree' of mythic vision that is associated with Homer and Sophocles but also lives in Aristotle, Herodotus, Pliny, and other classical naturalists." — David Wallace, author of Mountains and Marshes and The Untamed Garden

"Neely's fascination with a huge swath of the Pacific Northwest coastal range is evident in this quiet essay collection that focuses on small details described in carefully studied prose . . . This is the sort of introspective writing that will appeal strongly to readers seeking to gain a deeper appreciation of their environment, and those with curiosity about or longing for the region he knows so well. Neely clearly spent a lot of time watching and listening, both to the people and animals that call the area home, and his observations have real staying power."— Booklist

"Fans of Joseph Wood Krutch, Henry David Thoreau, and John Muir will enjoy these essays even if they are not familiar with the specific geographic area." — Library Journal

"In Nick Neely's new book, Coast Range: A Collection From the Pacific Edge, he aptly captures that childlike sense of wonder about the natural world . . . The essays are just as pleasant to read for his meticulously arranged prose and artfully crafted imagery as they are for their educational qualities."— Idaho Mountain Express

"Nick Neely is a searcher and, lucky for us, a collector as well. Coast Range is his collection, his 'open–air curiosity cabinet,' full of newts, agates, madrones, mushrooms, coyote, salmon, paw prints, bones and beautiful sentences. He is a precise writer and his essays are brilliant in the shining sense. But as well as being an accurate observer of the natural world, he is an exuberant participant, and we are both pulled in and lifted up by his generous, buoyant and ever–curious spirit. An important book, and one full of life and joy." —David Gessner, author of All the Wild That Remains: Edward Abbey, Wallace Stegner and the American West