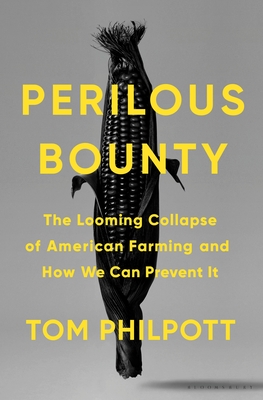 An unsettling journey into the United States' disaster-bound food system, and an exploration of possible solutions, from leading food politics commentator and farmer-turned-journalist Tom Philpott.

More than a decade after Michael Pollan's game-changing The Omnivore's Dilemma transformed the conversation about what we eat, a combination of global diet trends and corporate interests have put American agriculture into a state of "quiet emergency," from dangerous drought in California--which grows more than 50 percent of the fruits and vegetables we eat--to catastrophic topsoil loss in the "breadbasket" heartland of the United States. Whether or not we take heed, these urgent crises of industrial agriculture will define our future.

In Perilous Bounty, veteran journalist and former farmer Tom Philpott explores and exposes the small handful of seed and pesticide corporations, investment funds, and magnates who benefit from the trends that imperil us, with on-the-ground dispatches featuring the scientists documenting the damage and the farmers and activists who are valiantly and inventively pushing back.

Resource scarcity looms on the horizon, but rather than pointing us toward an inevitable doomsday, Philpott shows how the entire wayward ship of American agriculture could be routed away from its path to disaster. He profiles the farmers and communities in the nation's two key growing regions developing resilient, soil-building, water-smart farming practices, and readying for the climate shocks that are already upon us; and he explains how we can help move these methods from the margins to the mainstream.

Tom Philpott has been the food and agriculture correspondent for Mother Jones since 2011. Previously, he covered food as a writer and editor for the environmental-news website Grist. Philpott's work on food politics has appeared in the New York Times, Newsweek, and the Guardian, among other places. From 2004 to 2012, he farmed at Maverick Farms in Valle Crucis, NC. He lives in North Carolina and Austin, Texas.

"Shutting your eyes may be presidential policy, but Philpott won’t let us get away with it. He wants to focus our attention squarely on the environmental consequences of the global and, especially, the American way of raising food. Nothing, his new Perilous Bounty reminds us, is going in the right direction. . . We can’t lose sight of the land, water and air that need the loudest and longest advocacy. Perilous Bounty will line up many new recruits." - New York Times Book Review

"The most important book on the food system in years." - Michael Pollan, via Twitter

"[Philpott] makes a solid case that our intensive, industrial farm practices are draining California aquifers and causing severe fertile soil erosion in the Plains states. . . The book acknowledges a body of news reporting on this issue but deftly pulls together the whole crisis. Philpott is a veteran reporter for Mother Jones magazine and he has himself been a farmer, so he knows the language of agriculture." - Associated Press

"We should all listen to Tom Philpott. Farming in the United States is in grave danger, and this vitally important, lucidly written book opens our eyes to the disastrous environmental and health crises that have resulted from our current industrial agricultural practices." - Alice Waters

“Tom Philpott knows how to farm and how to write. His warning in Perilous Bounty offers a simple choice. We can change our centralized, industrialized, corporate-controlled system of food production-or watch it collapse.” —Eric Schlosser, author of FAST FOOD NATION and COMMAND AND CONTROL

“Since Tom Philpott is among the first rank of food and farming writers it comes as no surprise, but Perilous Bounty is a tour de force - it showcases the danger we're in as the environmental vise tightens, and how we might still find our way out of this hole.” —Bill McKibben, author of THE END OF NATURE and FALTER

“Tom Philpott has been one of the leading lights in food-and-farming journalism over the last decade. In Perilous Bounty, he continues to show why his voice is a much-needed one, warning us about the impending collapse of industrial agriculture – and revealing what we can do about it.” —Mark Bittman, author of HOW TO COOK EVERYTHING

“There is no food writer I respect more than Tom Philpott. Perilous Bounty is masterful, important, and sobering - a must-read for anyone who eats and hopes to continue doing so in our changing world.” —Barry Estabrook, author of TOMATOLAND

“Amply illustrates, via enlightening interviews with hydrologists, geologists, soil chemists, and entomologists, the demands that corn/soy/meat culture have put on the Corn Belt, as well as the water burden of the industries of the Central Valley, are not only unsustainable, but likely catastrophic for future farming on that land . . . [Philpott] is deeply invested in-and knowledgeable about-all the ins and outs of the virtual oligarchy that controls American agriculture . . . a solid, keenly drawn critique of American agricultural circumstances and consequences.” —Kirkus Reviews, starred review

"Lucidly written, well-researched, and laced with profiles of farmers and communities fighting against the odds, this is a persuasive call for sweeping changes to the American food system." - Publishers Weekly

"Precise and pointed . . . With patient, quiet outrage and persuasive testimony from experts, Philpott makes the case that American farming faces multiple looming crises . . . This deeply reported study of American farming will terrify readers hoping for a sustainable future and will move them to action." - Shelf Awareness