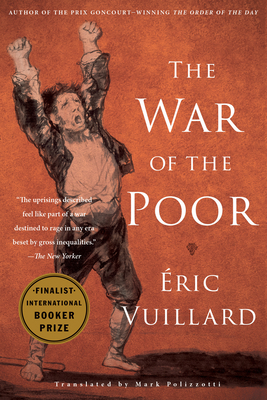 From the award-winning author of The Order of the Day, a powerful account of the German Peasants’ War (1524–25) that shows striking parallels to class conflicts of our time.

In the sixteenth century, the Protestant Reformation launched an attack on privilege and the Catholic Church, but it rapidly became an established, bourgeois authority itself. Rural laborers and the urban poor, who were still being promised equality in heaven, began to question why they shouldn’t have equality here and now on earth.

There ensued a furious struggle between the powerful—the comfortable Protestants—and the others, the wretched. They were led by a number of theologians, one of whom has left his mark on history through his determination and sheer energy. His name was Thomas Müntzer, and he set Germany on fire. The War of the Poor recounts his story—that of an insurrection through the Word.

In his characteristically bold, cinematic style, Éric Vuillard draws insights from this revolt from nearly five hundred years ago, which remains shockingly relevant to the dire inequalities we face today.

Éric Vuillard is an award-winning author and filmmaker who has written ten books, including Conquistadors (winner of the 2010 Prix Ignatius J. Reilly), and La bataille d’Occident and Congo (both of which received the 2012 Prix Franz-Hessel and the 2013 Prix Valery-Larbaud). He won the 2017 Goncourt Prize, France’s most prestigious literary prize, for The Order of the Day (Other Press, 2018). Born in Lyon in 1968, he now lives in Rennes, France.

Mark Polizzotti has translated more than fifty books from the French, including works by Gustave Flaubert, Patrick Modiano, Marguerite Duras, André Breton, and Raymond Roussel. A Chevalier of the Ordre des Arts et des Lettres and the recipient of a 2016 American Academy of Arts & Letters Award for Literature, he is the author of eleven books. He directs the publications program at the Metropolitan Museum of Art in New York.

“Artful…cinematic…[Vuillard] knit[s] things together with a muscular, angry commentary on ‘the great sophisms of power.’ He never forces analogies with the present, but the uprisings he describes feel like part of a war destined to rage in any era beset by gross inequalities.” —The New Yorker

“A slender, vivid history of a 16th-century populist revolt that holds relevance for current times…[A] powerful, moving book…in which every word is important, one that deserves to be read multiple times.” —Kirkus Reviews (starred review)

“This unique and provocative account brings the chaos of the Reformation to vibrant life.” —Publishers Weekly

“In times of punishing social and economic inequality, not unlike the one we are enduring, messianic prophets such as the German preacher and radical Thomas Müntzer rise to mobilize the wretched of the earth to defy the ruling elites. Éric Vuillard draws on this epic moment in sixteenth-century history, known as the Peasants’ War, to remind us that there are serious consequences to unfettered greed and a callous disregard for the plight of the working class by a rapacious oligarchic elite.” —Chris Hedges, author of America: The Farewell Tour

“The War of the Poor is a brilliant parable of the burning rage that extreme inequality calls forth in the poor, and the terrified cruelty that the rich mete out in reply. This is historical narrative as existentialist politics. Its account of ecstatic populist insurrection in sixteenth-century Germany is written in the universal language of lived desire, and speaks directly, here and now, to me and you.” —Daniel Markovits, Guido Calabresi Professor of Law, Yale Law School, and author of The Meritocracy Trap

“A small masterpiece, concise and sharp as a knife…with a relevance at once searing, chilling, and astounding.” —L’Obs

“An entire world in so few pages. [The War of the Poor has a] historical and literary density that commands admiration.” —La République des livres