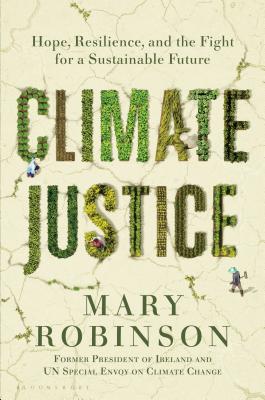 The antidote for your climate change paralysis. —Sierra Magazine

An urgent call to arms by one of the most important voices in the international fight against climate change, sharing inspiring stories and offering vital lessons for the path forward.

Holding her first grandchild in her arms in 2003, Mary Robinson was struck by the uncertainty of the world he had been born into. Before his fiftieth birthday, he would share the planet with more than nine billion people--people battling for food, water, and shelter in an increasingly volatile climate. The faceless, shadowy menace of climate change had become, in an instant, deeply personal.

Mary Robinson’s mission would lead her all over the world, from Malawi to Mongolia, and to a heartening revelation: that an irrepressible driving force in the battle for climate justice could be found at the grassroots level, mainly among women, many of them mothers and grandmothers like herself. From Sharon Hanshaw, the Mississippi matriarch whose campaign began in her East Biloxi hair salon and culminated in her speaking at the United Nations, to Constance Okollet, a small farmer who transformed the fortunes of her ailing community in rural Uganda, Robinson met with ordinary people whose resilience and ingenuity had already unlocked extraordinary change.

Powerful and deeply humane, Climate Justice is a stirring manifesto on one of the most pressing humanitarian issues of our time, and a lucid, affirmative, and well-argued case for hope.

“As advocate for the forgotten and the ignored, Mary Robinson has not only shone a light on human suffering, but illuminated a better future for our world.” -Barack Obama

Mary Robinson is president of the Mary Robinson Foundation—Climate Justice. She served in two capacities as the United Nations Secretary-General’s Special Envoy on Climate Change. She is the former President of Ireland and United Nations High Commissioner for Human Rights, and is now Chair of the Elders and a member of the Club of Madrid. In 2009, she was awarded the U.S. Presidential Medal of Freedom.

"As advocate for the forgotten and the ignored, Mary Robinson has not only shone a light on human suffering, but illuminated a better future for our world." - Barack Obama

"Addressing climate phenomena is the way to ensure justice for humanity. Mary Robinson, as UN Special Envoy on climate change & as UN High Commissioner for Human Rights, has been a global champion to bring justice for all. Her book inspires & guides us on what to do to protect humanity & our only world." - Ban Ki-moon, 8th UN Secretary General, Member of the Elders

"The most dramatic symptoms of our changing global climate--rising sea levels, extreme weather events, increasing desertification, and water scarcity--disproportionately affect vulnerable communities that are often far removed from the causes of human greenhouse gas emissions. Mary Robinson has been their champion for many years, and Climate Justice gives them a voice that we all should hear. Robinson makes a powerful and compelling case that the climate crisis is a crisis of humanity, requiring far more than mitigation and adaptation, but a renewed sense of shared destiny. Simply put, climate action must work for the good of all, or it won’t work for anyone." - Richard Branson

"Robinson’s lucid, direct style works because it gives a voice to those who have taken it upon themselves to tackle Earth’s most pressing problems. The book’s central message is a mantra worth repeating: individual local action can grow into a global idea, producing positive change." - Observer

"Sustainable development is at the heart of climate justice--protecting the planet, now and for generations to come. The stories in this book reveal the lived experience of people doing just that, adapting and strengthening their resilience in the face of climate change. They are courageous men and women whose lessons we all should heed." - Gro Harlem Brundtland

"This is a book about people: farmers and activists in Africa, Asia, and the Americas, people whose livelihood is ruined by climate change and climate injustice. Yet it is also a celebration of their fight back. I was moved by Mary Robinson’s account of amazing women leading the fight for their communities." - Mo Ibrahim

"Mary Robinson brings the power of the voice of those heavily affected by climate change--particularly women--to the center of the consciousness of decision makers to propel collective action." - Graça Machel

"Climate Justice is the antidote for your climate change paralysis . . . [Robinson] uses her powerful platform to highlight the work of mostly female climate activists in frontline communities that are already reeling from the effects of climate change . . . Written in a post-Trump world, Climate Justice burns with urgency." - Sierra Magazine

"Exceptionally informative and impressively organized and presented, ‘Climate Justice: Hope, Resilience, and the Fight for a Sustainable Future’ is an erudite and documented manifesto with respect to a critically important and universal humanitarian issue." - Midwest Book Review

"Robinson's humility and compassion resonates through her story-telling. [Her] stories provide a window into our own future." - Irish Times

"Robinson and Palmer highlight inspiring stories of ordinary people who are making a difference for the environment—especially women who have become ‘agents of change.' " - Foreword Reviews

"Robinson fights despair with inspiring stories of activists, politicians and others who are helping people mitigate and adapt to the changes . . . Putting a human face to those on the front lines and giving them a voice, Robinson illustrates the day-to-day impacts of climate change on those around the world, making the threat more real, more pressing, and, ultimately, more frightening . . . Climate Justice is a compelling, easy read that should persuade people to take personal responsibility for the problem" - Ms. Magazine

"Robinson is uniquely qualified to write about the international fight for climate-change justice . . . A surefire winner." - Booklist

"Giving voice to the previously voiceless, providing seats at the table not only for the powerful who are proceeding heedlessly, but for those who have been suffering devastating consequences . . . Hopeful and optimistic . . . [Robinson] tells engaging stories of extraordinary accomplishments by ordinary people." - Kirkus Reviews

"An elegant and readable account of climate information and policy, embedded in ten powerful accounts of climate activists from around the world, eight of which focus on women . . . The accounts in Climate Justice share a trajectory of awakening, power, and the promise of deep, community-based change." - Women's Review of Books