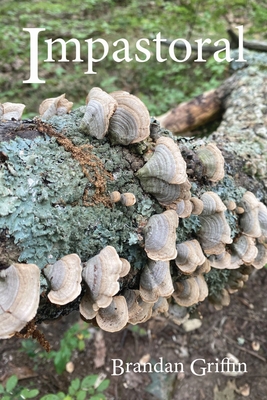 Poems that blur the boundaries of language and species, inviting us to imagine a new world.

The expansive reworking of language in Impastoral flies through the possible voices of outsides and insides—slug, probe, horse carriage, sewer, potted plant, lab rat, vampire, bot fly, giant cow. Language, in Brandan Griffin’s poetry, is neither human nor nonhuman, and it undoes that very idea of these distinctions, so beings—slugprobe, pottedhorsesewer, telepathybarcode, mammaltexts—morph and change in between boundaries.

Each of these poems is an organism, a collection of living connections, looped interiorities strung together in worlds tunneling through worlds. The poems’ composition becomes a decomposition of budding, breeding, and fluctuating. Reading this collection is an experience of becoming deformed and merged into the experiences of other beings; you are sea vent, microprocessor, cell gel, bug, a greenly translucent leaf typed half a sound at a time. Griffin invites us to imagine all possible beings and to hatch into a fresh world.

Brandan Griffin was born in Massachusetts and now lives in Sunnyside, New York. He is the author of the chapbook Four Concretures, and his poems have been published in Tagvverk, Chicago Review, and Word for/Word. Impastoral is his first book.

“Impastoral intervenes into the conventions of English orthography to grant words the capacity to visually register ‘telepithy’ between human and more-than-human beings. What appears on the page like misspelling is instead a spell-binding, the act of typing a sort of psychical sonar that allows the self to key into what lies far beyond itself: ‘why this one place that’s me/ while the sououound/ ripples and i/ wripple in it.’ The resulting poems are radical, records of mystical and ecological interconnection, prosodic and typographical experiences as ecstatic as they are wrenching. For the world to which Griffin’s poems are wired really is our world, as full of sewage and violence and digital signals as of animals and plants and insects, and to be intertwined is no paradise: ‘nature a sluice where/every creature gets flushed.’ Because these poems acknowledge the mortality at the core of being here so totally threaded together, I trust more their insights into their experience of what binds us in pleasure and wonder. And I adore this idiolect invented to let in more knowing, this language that claims, ‘The channels of gnosis are opening/again.’ Dear reader: it’s true. Ready yourself for a book like no other.”
— Brian Teare, author of Doomstead Days

“Griffin is a magician whose poems whirl letters and reshape words to conjure up a new language. Impastoral entranced me with its spells and spelling: ‘breign is / brain / is two squirrels is squarrels / eels / in skull bone.’ Ranging from bats to botflies to nefarious scientists teaching farm animals to speak, a large cast of mostly non-human voices offers the reader a quasi-sci-fi ecopoetry that does not sound like anything else. It’s rare to encounter a first book that so confidently invents its style against the familiar. I felt like I was learning to read with kaleidoscope glasses. Both global and cellular, Griffin’s vision inspires us to perceive our world in fresh and memorable ways.”
— Alan Felsenthal, author of Lowly

“Griffin’s febrile, fertilizing Impastoral is the most beautiful and mutually liberating work, of the symbiotic imagination, is poetry ‘suckling all species.’ Not post-lyric but compost lyric hyper sentience: Griffin’s superfine awareness joins the ritualistic decompositional forces of nature, breaking the cell walls between the biographeme and elegy with a Word that is always teeming with motion, faster than the malafouster (disaster!) it dissolves before resolving elsewhere, in the arms of the fly, with a new superabundance of being to which he adds his. These are poems of linguistic telepathy and viriditas— Hildegard von Bingen’s neologism for the ‘greening force’ of God. And Brandan is a devoted amanuensis among ‘all that goes frothing generously,’ decomposing and re-materializing in the superfine sentience teeming eternity technology that we are. God types faster, Griffin rides this, and his riding knows the working soil, the air, is already revolution. Griffin is the rare poet that joins nature in the awareness— that is already revolution—that heals and renews, that writes in the eternal, heart-root tense. Reading this work, my attention too grows to work, in the heart, to supersoaker its roots, in the earth and the ‘air glutted with sensewine,’ which is the greatest gift I can think of. Because of it I will always know a happier world.”
— Farnoosh Fathi, author of Great Guns