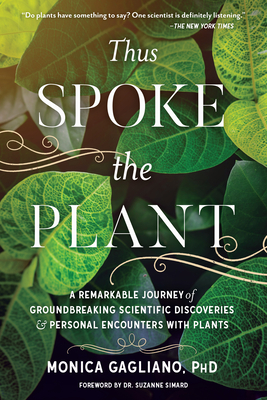 An accessible and compelling story of a scientist's discovery of plant communication and how it influenced her research and changed her life.

In this "phytobiography"--a collection of stories written in partnership with a plant--research scientist Monica Gagliano reveals the dynamic role plants play in genuine first-hand accounts from her research into plant communication and cognition. By transcending the view of plants as the objects of scientific materialism, Gagliano encourages us to rethink plants as people--beings with subjectivity, consciousness, and volition, and hence having the capacity for their own perspectives and voices. The book draws on up-close-and-personal encounters with the plants themselves, as well as plant shamans, indigenous elders, and mystics from around the world and integrates these experiences with an incredible research journey and the groundbreaking scientific discoveries that emerged from it. Gagliano has published numerous peer-reviewed scientific papers on how plants have a Pavlov-like response to stimuli and can learn, remember, and communicate to neighboring plants. She has pioneered the brand-new research field of plant bioacoustics, for the first time experimentally demonstrating that plants emit their own 'voices' and, moreover, detect and respond to the sounds of their environments. By demonstrating experimentally that learning is not the exclusive province of animals, Gagliano has re-ignited the discourse on plant subjectivity and ethical and legal standing. This is the story of how she made those discoveries and how the plants helped her along the way.

MONICA GAGLIANO, PhD, is Research Associate Professor of Evolutionary Ecology at the Centre of Evolutionary Biology at the University of Western Australia, a Research Affiliate at the Sydney Environment Institute at the University of Sydney, and former Fellow of the Australian Research Council. She is the author of numerous scientific articles in the fields of animal and plant behavioral and evolutionary ecology, and is the co-editor of The Green Thread: Dialogues with the Vegetal World (Lexington Books, 2015) and The Language of Plants: Science, Philosophy and Literature (Minnesota University Press, 2017). Her work has extended the concept of cognition (including perception, learning processes, memory and consciousness) in plants. Gagliano has pioneered the brand-new research field of plant bioacoustics, for the first time experimentally demonstrating that plants emit their own 'voices' and, moreover, detect and respond to the sounds of their environments. For more information, visit: www.monicagagliano.com

"Do plants have something to say? One scientist is definitely listening."
—The New York Times

"If plants can 'learn' and 'remember,' as Gagliano believes, then humans may have been misunderstanding plants, and ourselves, for all of history."
—The Paris Review

In this revelatory new book, we are brought into the presence of gifted storytellers in three different forms: a scientist, traditional plant practitioners, and the plants themselves. Gagliano’s discoveries uproot assumptions about the plant world as insensate, revealing their capacities to listen, learn and remember. This is a compelling story of discovery at many levels, simultaneously personal, scientific, and spiritual. It will change the way you see the world.”
—Dr. Robin Wall Kimmerer, SUNY Distinguished Teaching Professor, director of the Center for Native Peoples and the Environment, and author of Braiding Sweetgrass: Indigenous Wisdom, Scientific Knowledge, and the Teachings of Plants

“Beautifully written and thought provoking, this book brings to light the relationship of an accomplished evolutionary ecologist deeply rooted in Western science and culture, and some plant species, which guide her through dreams and visions with the support of indigenous wise women and men. An inspiration for those willing to listen to the many voices of nature, living as we are in an animated intelligent world we are rapidly destroying.”
—Luis Eduardo Luna, author of Vegetalismo: Shamanism Among the Mestizo Population of the Peruvian Amazon, and co-author of Ayahuasca Visions: The Religious Iconography of a Peruvian Shaman

“In part guided by indigenous shamans, in part by the author’s own cultivated receptivity, Gagliano dives into isolation with various plant species which have been recognized as having strong voices that humans can hear. She consults with plants that give specific instructions about how to prove botanical consciousness in both the seen and unseen worlds.”
—Kathleen Harrison, MA, ethnobotanist, Botanical Dimensions

“Those who wish to see how a shamanic approach can help advance the
scientific understanding of plants need to read this wonderful book.
Monica Gagliano opens up new frontiers and her methods deserve broad
attention.”
—Jeremy Narby, PhD, author of The Cosmic Serpent

“A cure for biases and preconceptions. An antidote to tunnel vision. A book that reverberates well after you’ve laid it down. Gagliano’s brave disclosures, both professional and personal, transcend plants. Thus Spoke the Plant is about them, if only through the author’s out-of-the-box way of listening to plants. As in a pairing of food and wine that blurs the boundaries between the ingredients, you will not think of science and intuitions as detached anymore. Thus spoke Gagliano.”
—Professor Paco Calvo, director of the Minimal Intelligence Lab (MINT Lab) at the University of Murcia, Spain