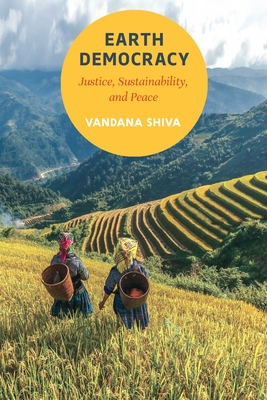 World-renowned environmental activist and physicist Vandana Shiva calls for a radical shift in the values that govern democracies, condemning the role that unrestricted capitalism has played in the destruction of environments and livelihoods. She explores the issues she helped bring to international attention—genetic food engineering, culture theft, and natural resource privatization—uncovering their links to the rising tide of fundamentalism, violence against women, and planetary death. Struggles on the streets of Seattle and Cancun and in homes and farms across the world have yielded a set of principles based on inclusion, nonviolence, reclaiming the commons, and freely sharing the earth’s resources. These ideals, which Dr. Shiva calls “Earth Democracy,” serve as an urgent call to peace and as the basis for a just and sustainable future.

Vandana Shiva is a physicist, world-renowned environmental thinker and activist, and a tireless crusader for economic, food, and gender justice. She is the author and editor of many influential books, including Making Peace with the Earth, Soil Not Oil, Staying Alive, Stolen Harvest, Water Wars, and Globalization’s New Wars. Dr. Shiva is the recipient of more than twenty international awards, among them the Right Livelihood Award (1993); the John Lennon-Yoko Ono Grant for Peace (2008); The Sydney Peace Prize (2010); and the Calgary Peace Prize (Canada, 2011). In addition, she is a board member of the World Future Council and one of the leaders and board members of the International Forum on Globalization (whose other members include Jerry Mander, Edward Goldsmith, Ralph Nader, and Jeremy Rifkin). She travels frequently to speak at conferences around the world.

“One of the world’s most prominent radical scientists.”
—The Guardian

“Shiva … has devoted her life to fighting for the rights of the ordinary people of India.… Her fierce intellect and her disarmingly friendly, accessible manner have made her a valuable advocate for people all over the developing world.”
—Ms. magazine

“Shiva is a burst of creative energy, an intellectual power.”
—The Progressive

“A leading thinker who has eloquently blended her views on the environment, agriculture, spirituality, and women’s rights into a powerful philosophy.”
—Utne Reader