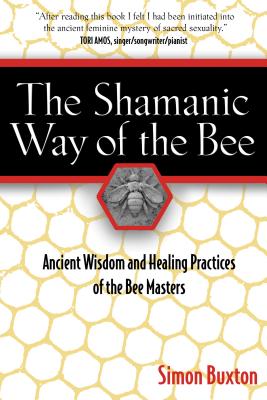 Bee shamanism may well be the most ancient and enigmatic branch of shamanism. It exists throughout the world--wherever in fact the honeybee exists. Its medicinal tools--such as honey, pollen, propolis, and royal jelly--are now in common usage, and even the origins of Chinese acupuncture can be traced back to the ancient practice of applying bee stings to the body’s meridians.

In this authoritative ethnography and spiritual memoir, Simon Buxton, an elder of the Path of Pollen, reveals for the first time the richness of this tradition: its subtle intelligence; its sights, sounds, and smells; and its unique ceremonies, which until now have been known only to initiates. Buxton unknowingly took his first steps on the Path of Pollen at age nine, when a neighbor--an Austrian bee shaman--cured him of a near-fatal bout of encephalitis. This early contact prepared him for his later meeting with an elder of the tradition who took him on as an apprentice. Following an intense initiation that opened him to the mysteries of the hive mind, Buxton learned over the next 13 years the practices, rituals, and tools of bee shamanism. He experienced the healing and spiritual powers of honey and other bee products, including the “flying ointment” once used by medieval witches, as well as ritual initiations with the female members of the tradition--the Mellisae--and the application of magico-sexual “nektars” that promote longevity and ecstasy. The Shamanic Way of the Bee is a rare view into the secret wisdom of this age-old tradition.

Simon Buxton, author of The Shamanic Way of the Bee, is the founder/director of The Sacred Trust in England, dedicated to the teaching of practical shamanism for the modern world. He is also the co-author of Darkness Visible. He teaches Darkness Visible workshops internationally and lives in England.

“. . . brings radiant life to an ancient shamanic path.”
— Sandra Ingerman, author of Soul Retrieval and Medicine for the Earth

“A fascinating story of one man’s journey into the shamanic realm and ancient wisdom.”
— Oriah Mountain Dreamer, author of The Invitation

“An exquisitely written, powerful, and important book. It reveals for the first time a European form of shamanism and healing magic that arises lucidly and sweetly from the natural world immediately around us--the extraordinary details of which we so often overlook.”
— Brooke Medicine Eagle, author of Buffalo Woman Comes Singing

“We search the exotic and distant for transformative secrets, well-being and healing. But are we perceptive enough to receive the gifts from the humblest of our own gardens? No matter. Simon Buxton has walked this path, from the primordial to the present, and freely grants us the exquisite treasures contained within The Shamanic Way of the Bee.”
— S. R. Harrop, chairman of the department of anthropology, University of Kent, England

"Written in a beautiful, lyrical and poetic way, with personal vignettes, anecdotes, and sacred teachings which, in a way, are reminiscent of the Sufi tradition but with the hard edge of realism characteristic of the Keltic Way--the Way of the Hero. This book is an absolute must-have addition to any serious collection of shamanic wisdom.”
— Sacred Hoop magazine

"This book is like having a backstage-pass into the actual secret life of bees. Bee Master, Simon Buxton, takes us on his shaman's journey that unveils a tradition that has been held sacred for thousands of years. After reading this book, I felt I had been initiated into the ancient feminine mystery of sacred sexuality."
— Tori Amos, Performing Artist

“Every now and then there is a book that is not only well thought out but well thought of, one that dares to offer ancient wisdom for the modern spirit. Simon Buxton's The Shamanic Way of the Bee is such a book. It offers a brilliant and timeless perspective while tantalizing the reader with a splendid, eloquent, and comprehensible presentation. A leading voice in shamanism, Simon Buxton has given us a truly remarkable book, one that is destined to withstand the test of time and lead us further down an ancient path in contemporary times.”
— Ken Eagle Feather, author of On the Toltec Path

“Simon Buxton's much-awaited debut is set to revolutionize the way we see European native traditions. This is a compelling read with elegantly chosen words that convey complex spiritual truths in a beautifully simple way. The Shamanic Way of the Bee promises to become a shamanic classic.”
— Prediction magazine

"As Simon remarks in his fascinating and inspirational book, sometimes we have no choice but to lie still, so that we may become a speck in the universe and drink in the nature of the world. I call my soul to be present, to witness the power of European shamanism and my friend’s journey with the honeybee. Ometeotl."
— Elena Avila, MSN, RN, Curandera/Aztec shaman healer and author of Woman Who Glows in the Dark

"...a rare book that reminds us that we are surrounded by magic, that even the most mundane aspect of our world overflows with magic....Simon Buxton joins the ranks of my favorite shamans and my favorite writers with this groundbreaking book."
— Michael Peter Langevin, Magical Blend, March 2005

“Simon Buxton is a man with genuine miracles to impart, taking us inside a remarkable hidden world of wonders and magic. If you buy only one book this year to help you on your path toward Truth, make sure it’s this one.”
— Ross Heaven, author of Vodou Shaman

"Simon Buxton’s unusually wondrous tale combined with his exquisite use of words brings radiant life to an ancient shamanic path: the Way of the Bee. Delve into the mystery with Buxton--the story and teachings are brilliant!”
— Sandra Ingerman, author of Soul Retrieval and Medicine for the Earth

"Written from the heart and soul, this book deserves study by all serious students of spirituality. While it is shamanic in aspects of presentation, ritual and belief, the wisdoms contained therein are ancient beyond time and applicable to all traditions."
— LIGHT, the journal of the College of Psychic Studies

". . . this title offers a unique insight into the arcane knowledge of our ancestors and the hidden gifts of the honeybee."
— Victoria Earle, Caduceus, Spring '06

“In this authoritative ethnography and spiritual memoir Simon Buxton, an elder in the path of pollen, reveals for the first time the richness of this tradition, its subtle intelligence; its sights sounds and smells, and its unique ceremonies which until now have been known only to initiates. The Shamanic Way of the Bee is a rare view into the secret wisdom of this age-old tradition.”
— Embody Magazine, October 2013