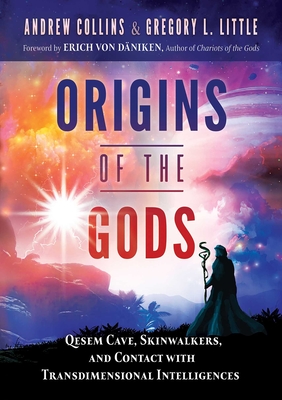 • Shows how the earliest forms of shamanism began at sites like Qesem Cave in Israel more than 400,000 years ago

From Göbekli Tepe in Turkey to the Egyptian pyramids, from the stone circles of Europe to the mound complexes of the Americas, Andrew Collins and Gregory L. Little show how, again and again, our ancestors built permanent sites of ceremonial activity where geomagnetic and gravitational anomalies have been recorded. They investigate how the earliest forms of animism and shamanism began at sites like the Denisova Cave in the Altai Mountains of Siberia and Qesem Cave in Israel more than 400,000 years ago. They explain how shamanic rituals and altered states of consciousness combine with the natural forces of the earth to create portals for contact with otherworldly realms—in other words, the gods of our ancestors were the result of an interaction between human consciousness and transdimensional intelligence.

The authors show how the spiritual and shamanic beliefs of more than 100 Native American tribes align with their theory, and they reveal how some of these shamanic transdimensional portals are still active, sharing vivid examples from Skinwalker Ranch in Utah and Bempton in northern England.

Ultimately, Collins and Little show how our modern disconnection from nature and lack of a fully visible night sky makes the manifestations from these ultraterrestrial intelligences seem random. If we can restore our spiritual connections, perhaps we can once again communicate with the higher dimensional beings who triggered the advancements of our earliest ancestors.

Andrew Collins is a science and history writer who investigates advanced civilizations in prehistory. He is the co-discoverer of a massive cave complex beneath the Giza plateau, now known as “Collins’ Cave.” The author of several books, including Origins of the Gods and Göbekli Tepe: Genesis of the Gods, he regularly appears on radio shows, podcasts, and TV series, including Ancient Aliens, The UnXplained with William Shatner, and Lost Worlds. He lives in Essex, England.

Gregory L. Little, Ed.D., is the author of over 30 books, including Edgar Cayce’s Atlantis and The Illustrated Encyclopedia of Native American Indian Mounds and Earthworks. His research has been featured on the National Geographic Channel, MSNBC, Discovery, and the History Channel. He lives in Collierville, Tennessee.

Hailed as one of the forefathers of the Ancient Astronaut theory, Erich von Däniken is the award-winning and bestselling author of Chariots of the Gods, Twilight of the Gods, and many other books. He lectures throughout the world and has appeared in TV specials and many episodes of Ancient Aliens on the History Channel. A cofounder of the Archaeology, Astronautics, and SETI Research Association, he lives in Switzerland. In 2019, Erich von Daniken was cited as one of the "100 Most Spiritually Influential Living People in the World" according to Watkins Mind Body Spirit magazine.

“Intriguing, thought-provoking, and researched in impressive detail, Origins of the Gods presents a fascinating dossier of out-of-the-box thinking on the place of humanity in the universe.”
— Graham Hancock, author of the New York Times bestseller America Before

“With clear-eyed objectivity and scholarship, this book fearlessly covers a vast array of subjects within the ‘jigsaw of paranormality.’ . . . An important book and instant classic.”
— Lynn Picknett & Clive Prince, authors of When God Had a Wife

“For years I have marveled at these two explorers and their passion for digging deeper into the mysteries surrounding the dimensions of life with its familiar and alien entities that live throughout. Their discoveries combined with an innate understanding of the paranormal have lifted us from our finite terrestrial consciousness into an infinite wondrous awareness. In this latest volume they chronicle the evolution of life in all its manifestations. An enlightening, fascinating, and astonishing read.”
— John Van Auken, director of Edgar Cayce’s Association for Research and Enlightenment (A.R.E.)

“Collins and Little reveal extraordinarily unique and deeply meaningful patterns and information that have long been overlooked, and they accomplish their objective by looking where so many others have failed to look. These authors just may have shaken loose the formerly forbidden fruit from the true lost tree of knowledge.”
— Brent Raynes, editor of Alternate Perceptions Magazine

“Reading Origins of the Gods has inspired me to take a road trip to visit the Great Sand Dunes in southern Colorado, Skinwalker Ranch in Utah, and Jewel Cave in the Black Hills of South Dakota. Maybe take a side trip to Israel and Egypt? Only I’ll be leaving my iPhone, Kindle, Apple Watch, and other EMF-producing devices home for the holiday so that I can better tap into Earth’s ambient frequency. Thanks to this pair of intrepid researchers and fellow writers, I’ll be trying to recapture the mystery and magic of planet Earth, as did our ancient ancestors, whose mystical experiences--communicating with an intelligence greater than their own--is at the root of divine revelation.”
— Sidney D. Kirkpatrick, New York Times bestselling author of A Cast of Killers and Edgar Cayce

"Enhanced with an informative introduction by Erich Von Daniken (author of the iconic and ground breaking book Chariots of the Gods, Origins of the Gods: Qesem Cave, Skinwalkers, and Contact with Transdimensional Intelligences is essential reading for all students of ancient mysteries, ancient astronaut theories, shamanic beliefs, and metaphysical studies collections. While highly recommended as a unique and impressively informative addition to personal, professional, community, college, and academic library collections, it should be noted that Origins of the Gods is also available in a digital book format (Kindle, $16.99)."
— James A. Cox, Midwest Book Review