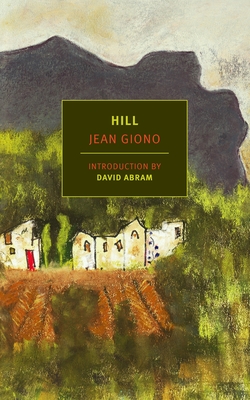 Jean Giono, a 20th century French writer best known in the English-speaking world for his fable The Man Who Planted Trees, was starkly anti-modern in his outlook, prefering the shepherd to the industrialist, the village to the city, and the living world to the one paved over.

Hill, his first novel, is a story of primal conflict between the members of a small, dying village, and the natural world, which in Giono's fiction is as live as any human character. Though written a century ago, this stark and numinous tale (an animist, Giono's world brims with gods) of ecological imbalance feels more pertinent than ever. A marvelous creation.

Deep in Provence, a century ago, four stone houses perch on a hillside. Wildness presses in from all sides. Beyond a patchwork of fields, a mass of green threatens to overwhelm the village. The animal world—a miming cat, a malevolent boar—displays a mind of its own.

The four houses have a dozen residents—and then there is Gagou, a mute drifter. Janet, the eldest of the men, is bedridden; he feels snakes writhing in his fingers and speaks in tongues. Even so, all is well until the village fountain suddenly stops running. From this point on, humans and the natural world are locked in a life-and-death struggle. All the elements—fire, water, earth, and air—come into play.

From an early age, Jean Giono roamed the hills of his native Provence. He absorbed oral traditions and, at the same time, devoured the Greek and Roman classics. Hill, his first novel and the first winner of the Prix Brentano, comes fully back to life in Paul Eprile’s poetic translation.

Jean Giono (1895–1970) was born and lived most of his life  in the town of Manosque, Alpes-de-Haute-Provence. Largely self-educated, he started working as a bank clerk at the age of sixteen and reported for military service when World War I broke out. He fought in the battle of Verdun and was one of the few members of his company to survive. After the war, he returned  to his job and family in Manosque and became a vocal, lifelong pacifist. After the success of Hill, which won the Prix Brentano, he left the bank and began to publish prolifically. During World War II Giono’s outspoken pacifism led some to accuse him unjustly of collaboration with the Nazis; after France’s liberation in 1944, he was imprisoned and held without charges. Despite being blacklisted after his release, Giono continued writing and was elected to the Académie Goncourt in 1954.

Paul Eprile is a longtime publisher (Between the Lines, Toronto), as well as a poet and translator. He is currently at work on the translation of Jean Giono’s novel Melville (forthcoming from NYRB) and lives on the Niagara Escarpment in Ontario, Canada.

David Abram is the director of the Alliance for Wild Ethics. A cultural ecologist, philosopher, and performance artist, he is the award-winning author of Becoming Animal: An Earthly Cosmology and The Spell of the Sensuous: Perception and Language in a More-Than-Human World. He teaches and lectures around the world and lives with his family in the foothills of the southern Rockies.

“In Hill [Giono] . . . decided to show the peasants of his region of Provence in all their particularity—and also to show the beauty and terror of nature in its raw state, stripped of its classical allusions.”
—Edmund White, The New York Review of Books

“Giono’s voice is the voice of the realist; his accents are the accents of simplicity, power and a passionate feeling for a land and a people that he must love as well as understand.”
—The New York Times