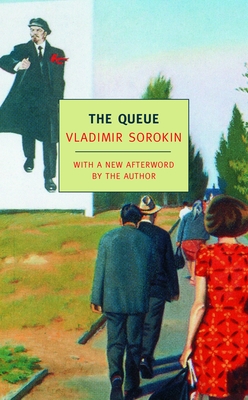 Vladimir Sorokin’s first published novel, The Queue, is a sly comedy about the late Soviet “years of stagnation.” Thousands of citizens are in line for . . . nobody knows quite what, but the rumors are flying. Leather or suede? Jackets, jeans? Turkish, Swedish, maybe even American? It doesn’t matter–if anything is on sale, you better line up to buy it. Sorokin’s tour de force of ventriloquism and formal daring tells the whole story in snatches of unattributed dialogue, adding up to nothing less than the real voice of the people, overheard on the street as they joke and curse, fall in and out of love, slurp down ice cream or vodka, fill out crossword puzzles, even go to sleep and line up again in the morning as the queue drags on.

Vladimir Sorokin was born in a small town outside of Moscow in 1955. He trained as an engineer at the Moscow Institute of Oil and Gas, but turned to art and writing, becoming a major presence in the Moscow underground of the 1980s. His work was banned in the Soviet Union, and his first novel, The Queue, was published by the famed ?migr? dissident Andrei Sinyavksy in France in 1983. In 1992, Sorokin’s Collected Stories was nominated for the Russian Booker Prize; in 1999, the publication of the controversial novel Blue Lard, which included a sex scene between clones of Stalin and Khrushchev, led to public demonstrations against the book and to demands that Sorokin be prosecuted as a pornographer; in 2001, he received the Andrei Biely Award for outstanding contributions to Russian literature. Sorokin is also the author of the screenplays for Moscow, The Kopeck, and 4, and of the libretto for Leonid Desyatnikov’s The Children of Rosenthal, the first new opera to be commissioned by the Bolshoi Theater since the 1970s. He has written numerous novels, plays, and short stories, and his work has been translated throughout the world. NYRB Classics published his novel Ice in 2007. He lives in Moscow.

Sally Laird (1956-2010) was the editor of Voices of Russian Literature: Interviews with Ten Contemporary Writers, and the translator of many books, including The Time: Night by Ludmila Petrushevskaya.

"If queues were arranged in order of merit, it would only be fair to put the young Soviet writer Vladimir Sorokin at the head." -Guardian

"With humor, anger and irony, Sorokin creates a brilliant set piece, conveying the absurdity, the dehumanization and, above all, the inevitability of waiting in line." —Publishers Weekly

"The Queue dispenses entirely with authorial interpolation; indeed, it dispenses with everything except dialogue, mostly curt one-liners, as though transcribed direct from a radio play. The uncredited voices are queueing outside a clothes shop in summer: Party panjandrums barge in front of the accompaniment of quickly muffled protests; vodka circulates; the Moscow sun dexlines; romance germinates. Anti-Soviet elements will perhaps coo over Valdimir Sorokin's happy mining of elemental koptimism from an unlikely seam; more pertinent to our purposes this book, alone of the quartet, displays genuine zest." -The Times (London)

"This novel reduces to delightful absurdity the rough democracy of the long lines that Soviet people-in-the-street endure in order to buy "luxury" goods. Sorokin is an innovative young writer, never published officially in the USSR, who draws on two great Russian traditions sorely missing from Soviet literature: avant-garde experiment and a flair for nonsense. The book has no description, settings, or stage directionnothing but voices: snatches of conversation, rumors, jokes, howls of rage, roll calls, and sexy moans. Sorokin's magic pen turns this framework into a mini-picaresque novel with a hero of sorts. Readers with some imagination will enjoy following Vadim and his co-queuers through their days and nights on line and off." -Library Journal

Mr. Sorokin demonstrates a remarkable ear for dialogue...Occasionally in its characters’ speech The Queue resembles, as befits a colloquial account of an overnight queue, Waiting for Godot. Its humor, however, is broader and nowhere as stark.
— The New York Times

"The Queue is a devastating satire of Soviet bureaucracy, and its message is made even more effective by the deadpan method chosen for its delivery...reminiscent of Kafka, Orwell and Beckett in their explorations of nightmare societies...It's ending is ironic and funny, while reinforcing the cynical tone of the whole novel and the impression that the Soviet Union is a vast, unmanageable bureaucracy." -Globe and Mail