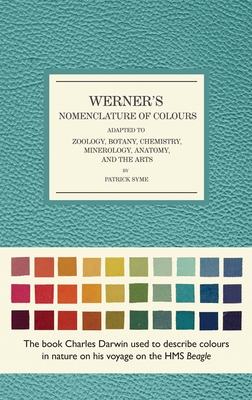 First published in 1814, Werner's Nomenclature of Colours is a taxonomic guide to the colors of the natural world that has been cherished by artists and scientists for more than two centuries. This beautiful pocket-size facsimile is certain to delight and inform a new generation of artists and scientists. Werner's Nomenclature of Colours is a charming artifact from the golden age of natural history and global exploration.

In the late eighteenth century, mineralogist Abraham Gottlob Werner devised a standardized color scheme that allowed him to describe even the subtlest of chromatic differences with consistent terminology. His scheme was then adapted by an Edinburgh flower painter, Patrick Syme, who used the actual minerals described by Werner to create the color charts in the book, enhancing them with examples from flora and fauna.

In the pre-photographic age, almost all visual details had to be captured via the written word, and scientific observers could not afford ambiguity in their descriptions. Werner's handbook became an invaluable resource for naturalists and anthropologists, including Charles Darwin, who used it to identify colors in nature during his seminal voyage on the HMS Beagle. Werner's terminology lent both precision and lyricism to Darwin's pioneering writings, enabling his readers to envision a world they would never see.

This new edition brings the classic work back to life.

Abraham Gottlob Werner (1749-1817) was a mineralogist and geologist at the mining school in Freiberg, Saxony. In his 1774 book On the External Characteristics of Fossils, he established a classification system to describe the colors of both fossils and minerals. Patrick Syme (1774-1845), an Edinburgh painter and art teacher, reconstructed Werner's colors by consulting actual minerals, paired the hues with examples from plant and animal life, and created the system of color swatches and descriptions that form the basis of this book.