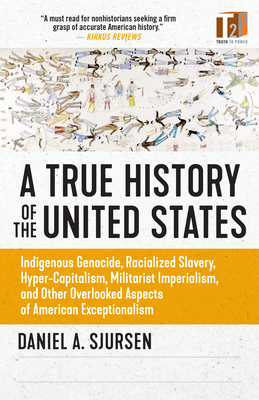 “Thought-provoking—a must read for [everyone] seeking a firm grasp of accurate American history."  —Kirkus (starred review)

Brilliant, readable, and raw. Maj. (ret.) Danny Sjursen, who served combat tours in Iraq and Afghanistan and later taught history at West Point, delivers a true epic and the perfect companion to Howard Zinn’s A People’s History of the United States.

Sjursen shifts the lens and challenges readers to think critically and to apply common sense to their understanding of our nation's past—and present—so we can view history as never before.

A True History of the United States was inspired by a course that Sjursen taught to cadets at West Point, his alma mater. With chapter titles such as "Patriots or Insurgents?" and "The Decade That Roared and Wept", A True History is accurate with respect to the facts and intellectually honest in its presentation and analysis.

"Sjursen exposes the dominant historical narrative as at best myth, and at times a lie . . . He brings out from the shadows those who struggled, often at the cost of their own lives, for equality and justice. Their stories, so often ignored or trivialized, give us examples of who we should emulate and who we must become."  —Chris Hedges, author of Empire of Illusion and America: The Farewell Tour

Daniel A. Sjursen recently retired from the US Army where he had reached the rank of major and served as a history instructor at West Point, his alma mater. He served tours with reconnaissance units in Iraq and Afghanistan. He is the author of Ghost Riders of Baghdad: Soldiers, Civilians, and the Myth of the Surge and Patriotic Dissent: America in the Age of Endless War. Follow him on Twitter at @SkepticalVet and listen to his podcast "Fortress on a Hill," co-hosted with fellow vet Chris "Henri" Henrikson.

"An engaging warts-and-all history of the U.S. meant to better educate those who fight for it...Strongly written and thought-provoking—a must read for nonhistorians seeking a firm grasp of accurate American history."
--Kirkus Reviews (starred review)

“Sjursen’s analysis compels the reader to think critically, in order to move beyond the half-truths that keep us from collectively solving America’s most persistent and damaging inequities.”
--Seattle Book Review

"Eye-opening and thought-provoking . . . for anyone wanting a solid and more complete understanding of our shared history, this is a great book to have."
--Lily Bartels of The Open Door Bookstore on Northeast Public Radio

"Author Sjursen's strong-worded narrative of American history makes a credible effort to close “the gap between what scholars know and what students learn” and writes in a way that non-historians will appreciate."
--FrontLine Magazine

"Sjursen knows how to inform, provoke, and inspire. Even better, he knows how to be equal parts tough-minded and openminded. A True History is for anyone wishing to be pushed beyond their comfort zone in the service of forming a more perfect union in America."
-- William J. Astore, historian, retired lieutenant colonel (USAF), author of Hindenburg: Icon of German Militarism

"Every history teacher, from middle school, high school, to university, will want to grab this brilliant book, a U.S. History study guide like no other. Based on the course he taught at West Point, historian and Army combat veteran Daniel Sjursen offers profound insights and challenges the standard U.S. History narrative."
-- Roxanne Dunbar-Ortiz, author of An Indigenous Peoples' History of the United States

"Sjursen exposes the dominant historical narrative as at best myth, and at times a lie. Popular history celebrates the power of the ruling elites in the present by deifying the ruling elites of the past. Sjursen relentlessly puts back into the historical record the racism, injustices, lies and crimes lesser historians ignore or whitewash. He exposes the complexity of problematic historical figures, such as the overt racist and imperialist Woodrow Wilson, too often transformed into a mythical social archetype whose darker actions, including a decision to re-segregate the federal government and repeated military interventions on behalf of American corporations in Latin America, destroyed tens of thousands of lives . . . Sjursen brings out from the shadows those who struggled, often at the cost of their own lives, for equality and justice. Their stories, so often ignored or trivialized, give us examples of who we should emulate and who we must become. "
-- Chris Hedges, author of Empire of Illusion and America: The Farewell Tour

"Nobody fuses together two time-honored cliches: 'those who do not learn from history are doomed to repeat it' and the West Point Academy motto of 'Duty, Honor and Country' better than retired Army Major Daniel Sjursen."
-- Coleen Rowley, FBI Special Agent (ret.), 9/11and Iraq War whistleblower, and Time magazine 2002 Person of the Year

"Major Danny Sjursen (Ret.) is the ultimate soldier/scholar who after 18 years fighting America's futile end-of-empire wars has written the definitive history of our imperial entanglements dating back to the pre-colonial era. His writing is an indispensable companion to Howard Zinn's classic unmasking of the perpetual fraud of American innocence."
-- Robert Scheer, author of How the United States Got Involved in Vietnam, journalist, and co-founder and editor of Truthdig.com

"To understand reality, there are two things that matter: 1) facts; and 2) the interpretation of those facts. Sjursen can masterfully wield both . . . an encouraging reminder that if America truly seeks to live the ideals it was founded on, there is still much more work to do."
-- Erik Edstrom, West Point graduate, Afghan War veteran, and author of Un-American: A Soldier's Reckoning of Our Longest War

"General Ulysses S. Grant felt the U.S. war with Mexico, 1846-1848, was wrong. In the judgment of real historians like Sjursen, Grant was right. In A True History of the United States, Sjursen explains why such historical candor and accuracy is critical by giving us the reason he taught West Pointers not only that Grant was right in his assessment of our war of aggression and aggrandizement in Mexico, but why historical truth in general is a necessary antidote to the hypocrisy of patriotic nationalism: 'Exposure to the historical myths and flaws...of the country they might very well die for seemed appropriate.  Anything less would have felt obscene.'   Read this book to discover why."
-- Colonel Lawrence Wilkerson, US Army (retired), former chief of staff to the secretary of state, professor of government and public policy at the College of William and Mary