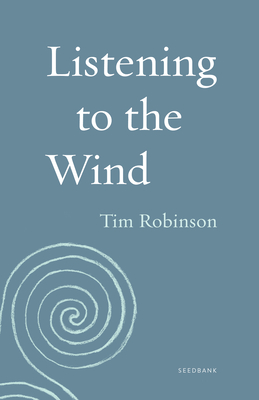 Cartographer and artist Tim Robinson fled the London art world for the west coast of Ireland and, through decades of wandering on foot, charting the landscape, and collecting stories (as well as making intricate maps), wrote a trilogy of books about Connemara. Combining natural and social history with the perceptiveness of an artist and the lyrical sentences of a poet, Robinson's work offers an unparalleled example of what writing about place can be. 'Listening to the Wind,' the first of the Connemara trilogy, is a work of profound depth and light. — From Stephen's favorites

Here is Connemara, experienced at a walker's pace. From cartographer Tim Robinson comes the second title in the Seedbank series, a breathtakingly intimate exploration of one beloved place's geography, ecology, and history.

We begin with the earth right in front of his boots, as Robinson unveils swaths of fiontarnach--fall leaf decay. We peer from the edge of the cliff where Robinson's house stands on rickety stilts. We closely examine an overgrown patch of heather, a flush of sphagnum moss. And so, footstep by footstep, moment by moment, Robinson takes readers deep into this storied Irish landscape, from the "quibbling, contentious terrain" of Bogland to the shorelines of Inis N to the towering peaks of Twelve Pins.

Just as wild and essential as the countryside itself are its colorful characters, friends and legends and neighbors alike: a skeletal, story-filled sheep farmer; an engineer who builds bridges, both physical and metaphorical; a playboy prince and cricket champion; and an enterprising botanist who meets an unexpected demise. Within a landscape lie all other things, and Robinson rejoices in the universal magic of becoming one with such a place, joining with " t]he sound of the past, the language we breathe, and our frontage onto the natural world."

Situated at the intersection of mapmaking and mythmaking, Listening to the Wind is at once learned and intimate, elegiac and magnificent--an exceptionally rich "book about one place which is also about the whole world" (Robert Macfarlane).

A cartographer and writer, Tim Robinson studied mathematics at Cambridge and then worked for many years as a teacher and visual artist in Istanbul, Vienna and London, among other places. In 1972 he moved to the Aran Islands. In 1986 his first book, Stones of Aran: Pilgrimage, was published to great acclaim. The second volume of Stones of Aran, subtitled Labyrinth, appeared in 1995. He has also published collections of essays and maps of the Aran Islands, the Burren, and Connemara. Connemara: Listening to the Wind, first published in 2006, won the Irish Book Award for Nonfiction. Robinson divides his time between London and Roundstone, Connemara.