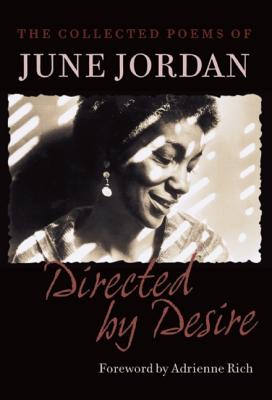 "Jordan . . . is among the bravest of us, the most outraged. She feels for all. She is the universal poet."--Alice Walker

"Always urgent, inspiring, and demanding, Jordan's work has left its indelible mark everywhere from "Essence" to "The Norton Anthology of Poetry," and from theater stages to the floors of the United Nations and the United States Congress."--"BOMB"

"Directed by Desire" is "the" definitive overview of the poetry of June Jordan, considered one of the most lyrically gifted poets of the late twentieth century. "Directed by Desire" gathers the finest work from Jordan's 10 volumes, as well as 70 new, never-before-published poems that she wrote while dying of breast cancer. Throughout over 600 pages readers will find intimate lyricism, elegance, fury, meditative solos, and dazzling vernacular riffs.

As Adrienne Rich writes in her introduction, June Jordan "wanted her readers, listeners, students, to feel their own latent power--of the word, the deed, of their own beauty and intrinsic value. . . . She believed, and nourished the belief, that genuine, up-from-the-bottom revolution must include art, laughter, sensual pleasure, and the widest possible human referentiality."

"These poems
they are things that I do
in the dark
reaching for you
whoever you are
and
are you ready?"

June Jordan taught at the University of California Berkeley for many years and founded Poetry for the People. Her 28 books include poetry, essays, fiction, and children's books. She was a regular columnist for "The Progressive" and a prolific writer whose articles appeared in "The Village Voice," "The New York Times," "Ms. Magazine," and "The Nation." Her numerous awards include a PEN West Freedom to Write Award and a lifetime achievement award from the National Black Writers Conference. After her death from breast cancer in 2002, a school in the San Francisco School District was renamed in her honor.

June Jordan was born in Harlem. Her twenty-eight books include poetry, essays, and children's books. A beloved teacher and exuberant activist, she founded Poetry For the People, and was a regular columnist for The Progressive and a prolific writer whose articles appeared in The Village Voice, The New York Times, Ms., and Essence. She died of breast cancer in 2002. Adrienne Rich is poet, essayist, and one of America's most widely read and respected literary figures. She has been a life-long activist for women's issues. Jan Heller Levi is the literary for the June Jordan estate. She lives in New York City. Sara Miles is a literary executor for the June Jordan estate. She lives in San Francisco.