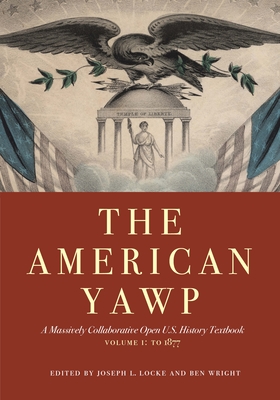 "I too am not a bit tamed--I too am untranslatable / I sound my barbaric yawp over the roofs of the world."--Walt Whitman, "Song of Myself," Leaves of Grass

The American Yawp is a free, online, collaboratively built American history textbook. Over 300 historians joined together to create the book they wanted for their own students--an accessible, synthetic narrative that reflects the best of recent historical scholarship and provides a jumping-off point for discussions in the U.S. history classroom and beyond.

Long before Whitman and long after, Americans have sung something collectively amid the deafening roar of their many individual voices. The Yawp highlights the dynamism and conflict inherent in the history of the United States, while also looking for the common threads that help us make sense of the past. Without losing sight of politics and power, The American Yawp incorporates transnational perspectives, integrates diverse voices, recovers narratives of resistance, and explores the complex process of cultural creation. It looks for America in crowded slave cabins, bustling markets, congested tenements, and marbled halls. It navigates between maternity wards, prisons, streets, bars, and boardrooms.

The fully peer-reviewed edition of The American Yawp will be available in two print volumes designed for the U.S. history survey. Volume I begins with the indigenous people who called the Americas home before chronicling the collision of Native Americans, Europeans, and Africans.The American Yawp traces the development of colonial society in the context of the larger Atlantic World and investigates the origins and ruptures of slavery, the American Revolution, and the new nation's development and rebirth through the Civil War and Reconstruction.

Rather than asserting a fixed narrative of American progress, The American Yawp gives students a starting point for asking their own questions about how the past informs the problems and opportunities that we confront today.

Joseph L. Locke is Assistant Professor of History at the University of Houston-Victoria. He is the author of Making the Bible Belt: Texas Prohibitionists and the Politicization of Southern Religion (2017). Ben Wright is Assistant Professor of Historical Studies at the University of Texas at Dallas. He is the coeditor of Apocalypse and the Millennium in the American Civil War Era (2013) and abolitionseminar.org, a NEH-funded resource for K-12 teachers. He is also Editor of the Teaching United States History Blog.