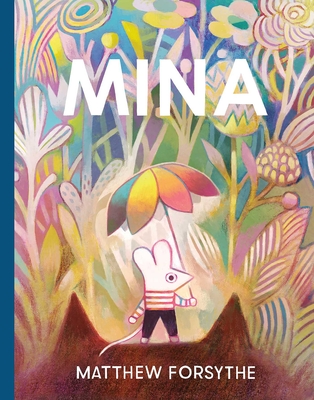 “Mina’s a mouse with better instincts than her father but a heart just as big! Beautifully illustrated with a palette more piquant than Forsythe’s brilliant Pokko and the Drum, Mina is possibly an even more satisfying tale! Delightful!”
— Julie Rowan-Zoch, Old Firehouse Books, Fort Collins, CO

From the creator of the acclaimed and beloved Pokko and the Drum comes an emotionally resonant, “richly imagined” (The Horn Book, starred review)​ picture book about trust, worry, and loyalty between a father and daughter.

Should Mina trust her father—or listen to her own instincts?

Matthew Forsythe is the author-illustrator of Pokko and the Drum, a Publishers Weekly Best Book of the Year, a recipient of the Boston Globe–Horn Book Award Honor, and a Charlotte Zolotow Honor Book. He is also an illustrator for animated films and television. His credits include Adventure Time, The Midnight Gospel, and Robin Robin, a stop-motion animated musical from Aardman Animations and Netflix. Visit him at ComingUpforAir.net.

Matthew Forsythe is the author-illustrator of Pokko and the Drum, a Publishers Weekly Best Book of the Year, a recipient of the Boston Globe–Horn Book Award Honor, and a Charlotte Zolotow Honor Book. He is also an illustrator for animated films and television. His credits include Adventure Time, The Midnight Gospel, and Robin Robin, a stop-motion animated musical from Aardman Animations and Netflix. Visit him at ComingUpforAir.net.

PreS-Gr 2–Mina is a bookish little mouse whose peaceful solitude is often interrupted by her irrepressible father, who has a habit of bringing home “surprises from the outside world.” When he brings home a truly shocking surprise, Mina can only respond with, “I don’t think that’s a squirrel.” It is clearly a cat. As Mina’s unease about cohabitating with a cat grows, her father brushes off her concerns. It is only after bringing home two more “squirrels,” and seeking the advice of a doctor because they will not eat the proffered acorns, that the simmering tension boils over. Forsythe (Pokko and the Drum) delivers a wickedly humorous cat and mouse tale. Many young readers will identify with Mina, who is so obviously correct and so unjustly dismissed. Mina’s father does not come off as cruel, simply too stubbornly optimistic to give credence to worry. Forsythe’s wry, concise text is enhanced by stylized and whimsical illustrations in watercolor, gouache, and colored pencil. Mina and her father are drawn in a slightly abstract, minimalist style, which has the effect of making the more richly detailed cats seem all the more threatening. One indelible page pairs the text, “That night Mina couldn’t sleep,” with the image of a wide-eyed Mina and her sanguine father in their brightly lit bedroom, while the massive face of the smug cat looms over their beds, its dark body extending into the adjoining page, seemingly draining the light and color from around it. The visual storytelling is exquisite, drawing readers in to search for the small details, such as the direction of a character’s gaze, that tell the real story. The book as a whole is engaging, perfectly paced and full of controlled suspense and biting humor. VERDICT This expertly crafted and delightfully quirky picture book is recommended for first purchase.–Elizabeth Lovsin, Deerfield P. L., IL
— School Library Journal *STARRED REVIEW*

Mina is a mouse, her nose always in a book, who lives “in her own little world where nothing ever bothered her.” Her busy father brings home things he collects from the outside world, and one day he tells Mina that he has a big surprise. The page-turn reveals a massive cat, staring morosely at them. “It’s a squirrel!” he declares. Forsythe’s understated humor effectively conveys Mina’s dilemma: when she can’t sleep, her father tells her there’s nothing to worry about, but looming over them both and taking up nearly every inch of their home is the cat, watching with narrowed eyes. They all manage to get along (and the cat gets a sweater!), but when a doctor visits the ailing pet—who has by now been joined by others—and names it as the feline it is, the cats pounce. (Not to worry.) Mina, much like the protagonist of Forsythe’s Pokko and the Drum (rev. 1/20), is whip-smart and patiently suffers a well-intentioned but hapless parent. The illustrations are also reminiscent of Pokko with their velvety textures; palette of beautiful coppers, crimsons, and forest greens; and warm glow that emanates from nearly every spread. More, please, of Forsythe’s richly imagined forest worlds. JULIE DANIELSON
— Horn Book Magazine, Starred

Mina the mouse has a comfortable existence in the woods, happily unbothered by her eccentric
father’s exploits. She doesn’t mind his harebrained schemes, reading calmly on as he rigs up
noisy inventions or covers their walls with postage-stamp art. She can even handle him bringing
home strays, including stick insects who stole all of her books. “We got you more books,” her
father says with a shrug. But when he announces that he has a big surprise, Mina knows that it
can’t be good. She warily steps out of their house to investigate his latest acquisition, and though
he insists that it’s a squirrel, Mina is pretty confident that it’s actually an enormous cat. Her father
welcomes the new friend into their home and maintains that everything will be fine, and Mina has
to admit that it is. Well, at least for a time, until he appears with two more “squirrels” and high
jinks ensue. It’s an unpredictable and uproarious tale, a pleasing blend of Forsythe’s (Pokko and
the Drum, 2019) trademark dry wit and obvious affection. The soft watercolor, gouache, and
colored pencil illustrations conjure a cozy, colorful world of snug burrows, clever details, and
terrific expressions. Marvelous mouse-sized mischief for all ages.
— Emily Graham
— Booklist *STARRED*

Mina, a tiny white mouse, does not know what to think about her father’s unusual houseguests.

Introvert Mina generally isn’t bothered by any of her father’s odd finds, including old tin cans, stamps he displays as fine art, and a troupe of wandering musicians. What finally pulls her nose out of her books are the “squirrels” her father brings home…rather huge, cat-looking ones. Suspecting that the creatures aren’t really squirrels, Mina keeps a wary eye on them for the next few days while her father makes the guests feel at home. When the cats turn against the mice, Mina’s father’s previous adventure in teaching stick insects to read comes in handy, and his refrain that “everything will be fine” proves true. Forsythe manages to convey so much personality in such a small package. Mina’s ability to remain engrossed in her books despite her eccentric father’s whims is amusing. The soft-edged illustrations have the gorgeous warmth and glow of firelight, with a palette dominated by shades of orange, burnt browns, and ranges of yellow with touches of blue. Light and shadow bring the mice’s world to life, providing dimension and movement. One cat is so expertly drawn that a slight shift of its eyes captures its sly intentions. (This book was reviewed digitally.)

A young mouse has every right to be worried when her father brings home a "squirrel" in this pitch-perfect picture book by the author of the equally charming Pokko and the Drum.

Mina is a dreamy but slightly anxious mouse who spends her days reading and drawing while her adventurous but imprudent father brings home "surprises from the outside world." She doesn't mind... until one day when he calls her outside to see his latest treasure, quite obviously a large, black-and-white cat. "It's a squirrel!" Mina's dad says with arm-flinging delight. "I don't think that's a squirrel," says Mina. The impassive-faced cat joins the mouse family's household, and an uneasy (for Mina) calm settles in. The addition of two more "surprises" to keep the first one company is the tipping point, however, especially when all three "squirrels" seem not to have any appetite for acorns. What follows may be the best line ever uttered by a literary mouse doctor: "Oh, I see the problem," says the doctor Mina's father has called in. "The problem is that these squirrels are definitely cats."

As with Pokko and the Drum, Matthew Forsythe brings to Mina a dry, droll humor and exquisite watercolor, gouache and colored-pencil illustrations. Patterns abound in the earth-toned pages: flower parasols, pack baskets, stylized butterflies, "antique art" (postage stamps). Mina's "obsessive reader" poses--on her belly on the floor, in a homemade tent, in bed, on her back, even on the back of the cat--will feel exactly right to every bookworm lucky enough to find this treasure. --Emilie Coulter, freelance writer and editor

Discover: A mouse named Mina must contend with the "surprise" her father brings home in this funny (for all ages!) picture book, beautifully illustrated and full of unexpected details.
— Shelf Awareness for Readers, *STARRED REVIEW*