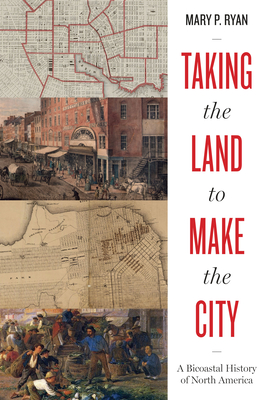 The history of the United States is often told as a movement westward, beginning at the Atlantic coast and following farmers across the continent. But cities played an equally important role in the country’s formation. Towns sprung up along the Pacific as well as the Atlantic, as Spaniards and Englishmen took Indian land and converted it into private property. In this reworking of early American history, Mary P. Ryan shows how cities—specifically San Francisco and Baltimore—were essential parties to the creation of the republics of the United States and Mexico.

Baltimore and San Francisco share common roots as early trading centers whose coastal locations immersed them in an international circulation of goods and ideas. Ryan traces their beginnings back to the first human habitation of each area, showing how the juggernaut toward capitalism and nation-building could not commence until Europeans had taken the land for city building. She then recounts how Mexican ayuntamientos and Anglo American city councils pioneered a prescient form of municipal sovereignty that served as both a crucible for democracy and a handmaid of capitalism. Moving into the nineteenth century, Ryan shows how the citizens of Baltimore and San Francisco molded landscape forms associated with the modern city: the gridded downtown, rudimentary streetcar suburbs, and outlying great parks. This history culminates in the era of the Civil War when the economic engines of cities helped forge the East and the West into one nation.

A noted historian who has won the Bancroft Prize and the Berkshire Prize, Mary P. Ryan is the author of several books, including Cradle of the Middle Class: The Family in Oneida County, New York, 1790–1865; Civic Wars: Democracy

Ryan casts cities as evolving organisms, born of material environmental conditions; political, social, and commercial relations; and ideas about how to organize life…With several maps to provide robust detail, Ryan argues that as denizens of Baltimore and San Francisco were constructing cities, they were also constructing a new world of commerce and politics.
— CHOICE

Throughout this very engaging and important book, [Ryan] notes how the organizing of the land nurtured democracy…, enabled commercial and then industrial capitalism to take hold, and contributed to the formation of a bicoastal nation independent of foreign control.
— Journal of Urban History

[A] conceptually ambitious history...With remarkable attention to detail, Ryan weaves deftly between the fields of political geography, vernacular architecture, and urban history to make the persuasive case that cities were incubators of American democracy, American capitalism, and the American nation itself...Taking the Land to Make the City is an elegant portrait of early Baltimore and San Francisco that is as enjoyable as it is insightful. It offers a convincing case for the centrality of urban history to the metanarratives of early US history and deserves to be widely read.
— H-Net Reviews

Ryan generously shares her deep knowledge of the emergence of Baltimore and San Francisco, two storied cities she has studied long and well...[Taking the Land to Make the City] is deeply informed, clearly written, and engagingly told.
— American Historical Review

[Taking the Land to Make the City] crafts a persuasive tale of the landscapes and polities of Baltimore and San Francisco as similarly mediating between physical and philosophical poles of government power, racial and socio-economic segregation, and territorial conquest...[Taking the Land to Make the City] both showcases a new methodology for conceptualizing American history and proclaims the importance of both cities in asserting distinct approaches to settlement, capitalism, and urban form that negotiated between national extremes.
— Western Historical Quarterly

[Taking the Land to Make the City] is a masterful ‘how to’ for those embarking on writing comparative urban histories that link archival methods with the contextual questions that arise from viewing cities’ unique spatial histories in relation to one another...By detailing Baltimore and San Francisco’s history from the engineering of soil to the sale of waterfront property, Taking the Land to Make the City explicates how there could have been, and might still be, another urban future on the horizon.
— Planning Perspectives

[Ryan's] bicoastal comparison dislodges the Atlantic supremacy of early American history...Ryan’s attention to the spatial production of representative democracy and municipal capitalism in cities builds on her pathbreaking work on the evolution of early American capitalism and democracy in Cradle of the Middle Class (1981) and Women in Public: Between Banners and Ballots (1990). In Taking the Land, cities were not simply sites of experimentation, but agents in producing a public—a public sphere, public markets, public parks, plazas and monuments, and a public consciousness.
— Reviews in American History

Taking the Land to Make the City is an imaginatively conceived and elegantly written account of antebellum city building in San Francisco and Baltimore. It draws upon recent currents in national and environmental history to open new vistas for urban history...Ryan’s focus on city building in San Francisco and Baltimore presents a fascinating transnational story that contrasts the forms of two competing colonial projects, the English in Baltimore and the Spanish and Mexicans in San Francisco.
— Journal of American History

[A] deeply researched history of Baltimore and San Francisco...[Ryan's] attention to Native American settlements and land use is an important corrective to urban and planning histories, which often start with European ideas about and plans for cities in the Americas.
— Journal of the Civil War Era

Fascinating...this is a book with two great strengths. First, it has a phenomenally thick description of the creation and development of two important North American cities. And second, it contains a set of provocative research questions and suggestions about the role of cities in colonization, national development, and democracy.
— Agricultural History