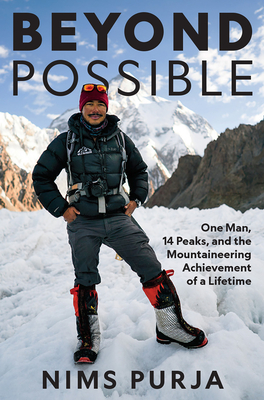 Nepali climber Nims Purja is the first man ever to summit all fourteen of the world’s 8000 meter “Death Zone” peaks. He did so in less than seven months, breaking the previous record of seven years.

In this spellbinding memoir, tied to the acclaimed Netflix documentary "14 Peaks," Purja reveals the man behind the climbs, explaining how his early life in Nepal and training as a soldier in Britain’s elite Gurkha and SBS units allowed him to achieve a mountaineering mission few thought was attainable. Purja shows how leadership, integrity, and collaboration drive world's greatest climbing feats, including the first-ever winter ascent of Pakistan’s K2—another mountaineering milestone that he achieved in January 2021.

Both profound and inspiring, this intimate book reveals what it takes to go miles beyond the possible.

Celebrated Nepali climber Nims Purja holds multiple mountaineering world records. After serving with the British Armed Forces as a Nepalese Gurkha and as a soldier in the Special Boat Service (SBS), an elite special forces unit of the Royal Navy, he took on a series of mountaineering challenges, including climbing all 14 of the world’s mountain peaks above 8,000 meters in just over six months, reaching the summits of Mount Everest, Lhotse, and Makalu in 48 hours and completing the first-ever winter ascent of Pakistan’s K2. He lives with his wife, Suchi, in Hampshire, England.