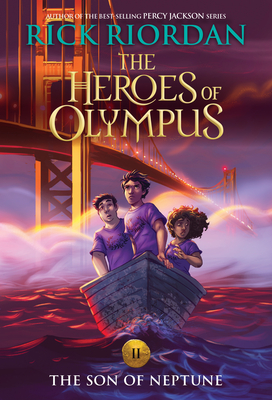 This is book number 2 in the The Heroes of Olympus series.

The second book in the mega-bestselling Heroes of Olympus series by Rick Riordan, now with fresh and exciting new cover art by graphic novelist Nilah Magruder.
Percy is confused. When he awoke after his long sleep, he didn’t know much more than his name. His brain-fuzz is lingering, even after the wolf Lupa told him he is a demigod and trained him to fight. Somehow Percy managed to make it to the camp for half-bloods, despite the fact that he had to continually kill monsters that, annoyingly, would not stay dead. But the camp doesn't ring any bells with him.

Hazel is supposed to be dead. When she lived before, she didn’t do a very good job of it. When the Voice took over her mother and commanded Hazel to use her “gift” for an evil purpose, Hazel couldn’t say no. Now, because of her mistake, the future of the world is at risk.

Frank is a klutz. His grandmother claims he is descended from ancient heroes, but he doesn’t even know who his father is. He keeps hoping Apollo will claim him, because the only thing he is good at is archery. His big and bulky physique makes him feel like a clumsy ox, especially in front of Hazel, his closest friend at camp. He trusts her completely—enough, even, to share the secret he holds close to his heart.

Beginning at the “other” camp for half-bloods and extending as far north as the land beyond the gods, this breathtaking second installment in the Heroes of Olympus series introduces new demigods, revives fearsome monsters, and features other remarkable creatures, all of whom are destined to play a part in the most important quest of all: the Prophecy of Seven.
The accessible and dramatic cover art by graphic novelist Nilah Magruder will attract a new generation of fans.

Rick Riordan, dubbed “storyteller of the gods” by Publishers Weekly, is the author of five #1 New York Times best-selling middle grade series with millions of copies sold throughout the world: Percy Jackson and the Olympians, The Heroes of Olympus, and the Trials of Apollo, based on Greek and Roman mythology; the Kane Chronicles, based on Ancient Egyptian mythology; and Magnus Chase and the Gods of Asgard, based on Norse mythology. Rick collaborated with illustrator John Rocco on two #1 New York Times best-selling collections of Greek myths for the whole family: Percy Jackson’s Greek Gods and Percy Jackson’s Greek Heroes. Rick is also the publisher of an imprint at Disney-Hyperion, Rick Riordan Presents, dedicated to finding other authors of highly entertaining fiction based on world cultures and mythologies. He lives in Boston, Massachusetts with his wife and two sons. Follow him on Twitter at @camphalfblood.


Nilah Magruder is a writer and artist based in Los Angeles, California. From her early days she developed an eternal love for three things: nature, books, and animation. She has written and storyboarded for studios such as Disney and DreamWorks. She also illustrates children's books, including the Dactyl Hill Squad series by Daniel Jose Older. Nilah is the author-illustrator of M.L.K., a middle grade graphic novel that won the Dwayne McDuffie Award for Diversity, and How to Find a Fox, a picture book. She has published short fiction in the anthology All Out, in Fireside magazine, and for Marvel Comics. When she's not working, Nilah is watching movies, growing herbs, roller-skating, and fighting her cat for control of her desk chair. Follow her on Twitter at @nilaffle.