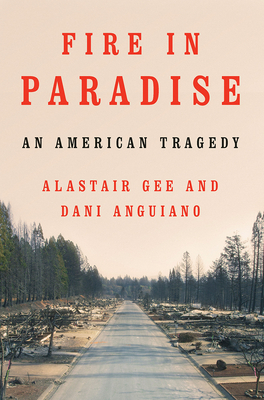 The harrowing story of the most destructive American wildfire in a century.

There is no precedent in postwar American history for the destruction of the town of Paradise, California. On November 8, 2018, the community of 27,000 people was swallowed by the ferocious Camp Fire, which razed virtually every home and killed at least 85 people. The catastrophe seared the American imagination, taking the front page of every major national newspaper and top billing on the news networks. It displaced tens of thousands of people, yielding a refugee crisis that continues to unfold.

Fire in Paradise is a dramatic and moving narrative of the disaster based on hundreds of in-depth interviews with residents, firefighters and police, and scientific experts. Alastair Gee and Dani Anguiano are California-based journalists who have reported on Paradise since the day the fire began. Together they reveal the heroics of the first responders, the miraculous escapes of those who got out of Paradise, and the horrors experienced by those who were trapped. Their accounts are intimate and unforgettable, including the local who left her home on foot as fire approached while her 82-year-old father stayed to battle it; the firefighter who drove into the heart of the inferno in his bulldozer; the police officer who switched on his body camera to record what he thought would be his final moments as the flames closed in; and the mother who, less than 12 hours after giving birth in the local hospital, thought she would die in the chaotic evacuation with her baby in her lap. Gee and Anguiano also explain the science of wildfires, write powerfully about the role of the power company PG&E in the blaze, and describe the poignant efforts to raise Paradise from the ruins.

This is the story of a town at the forefront of a devastating global shift—of a remarkable landscape sucked ever drier of moisture and becoming inhospitable even to trees, now dying in their tens of millions and turning to kindling. It is also the story of a lost community, one that epitomized a provincial, affordable kind of Californian existence that is increasingly unattainable. It is, finally, a story of a new kind of fire behavior that firefighters have never witnessed before and barely know how to handle. What happened in Paradise was unprecedented in America. Yet according to climate scientists and fire experts, it will surely happen again.

Alastair Gee is an award-winning editor and reporter at the Guardian who has also written for The New Yorker online, the New York Times, and the Economist.

Dani Anguiano writes for the Guardian and was a reporter for the Chico Enterprise-Record. She lives in the San Francisco Bay area.

A gripping ticktock account…Fire in Paradise covers the history of that part of California and the influence of climate change on these disasters, but at its core are visceral individual stories of bravery and tragedy.

A book about a California calamity that speaks to our present moment…With one voice, [Gee and Anguiano] tell a story that is both sweeping in scope and vivid in its particulars
— Carolyn Kellogg - Washington Post

Gripping…Fire in Paradise has the narrative propulsion and granular detail of the best breaking-news disaster journalism.

A page-turner from the get-go…The details of [the locals’] lives lend verisimilitude sure to hook the most callous of observers.
— Oakland Magazine

Gripping…The scale of the disaster is enormous, but the authors' focus on individual survival lends the book harrowing intimacy.
— Shelf Awareness

Drawing heavily on the powerful interviews they conducted at the time and in the stunned aftermath, [Gee and Anguiano] have created a gripping account of the fire and how it affected the community.
— Booklist

A tense and detailed account…Gee and Anguiano vividly describe the conflagration without sensationalizing it…This impressive report makes a convincing case that such tragedies as the Camp Fire are not a freak occurrence, but a glimpse of the future.
— Publishers Weekly

A gripping and meticulously reported account of how one California community was wiped from the map, and a terrifying bellwether of the mounting personal costs of the world’s climate emergency.
— Adam Higginbotham, author of Midnight in Chernobyl

Gee and Anguiano’s on-the-ground reporting from California’s deadliest wildfire is so riveting and evocative that you can almost smell the smoke—not just from the oaks and pines, but from all the scorched vinyl-sided homes, melted car tires, and exploding propane tanks. Their account of how a city of 27,000 burned to the ground in a matter of hours reads like a thriller—full of daring escapes, life-saving heroics, staggering loss of life, and bad actors. It’s also crucial. As the world warms, cities across the arid West are increasingly at risk of suffering a fate similar to Paradise.
— Dan Egan, author of The Death and Life of the Great Lakes

Fire in Paradise is not only a riveting narrative of the unprecedented but long-predicted disaster of the Camp Fire and the tragedy it wrought on a California town, but a thorough analysis of the histories that led to the disaster, a detailed look at its continuing consequences, and a glimpse of the harrowing, fiery future that western communities face.

The Paradise fire will stay in our collective memory; like Hurricane Katrina, it was a landmark moment in coming to see the changes that we’ve wrought by shifting our climate. This remarkable account will drive home the human cost, as well as remind you of the power of the human spirit, even, or especially, in a crisis.
— Bill McKibben, author of Falter

Fire in Paradise is the detailed reportage of people suddenly caught in a catastrophe that is spreading worldwide wherever there are forests—uncontrollable wildfire. This is a frightening book that will make readers take stock of their own home surroundings, regional infrastructure, and the values of our times.