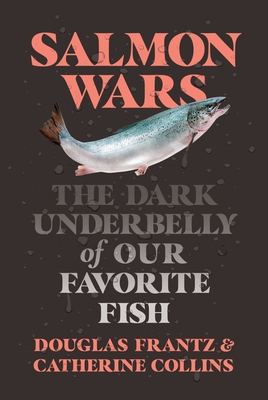 A Pulitzer Prize-winning correspondent and a former private investigator dive deep into the murky waters of the international salmon farming industry, exposing the unappetizing truth about a fish that is not as good for you as you have been told.

A decade ago, farmed Atlantic salmon replaced tuna as the most popular fish on North America’s dinner tables. We are told salmon is healthy and environmentally friendly. The reality is disturbingly different.

In Salmon Wars, investigative journalists Douglas Frantz and Catherine Collins bring readers to massive ocean feedlots where millions of salmon are crammed into parasite-plagued cages and fed a chemical-laced diet. The authors reveal the conditions inside hatcheries, where young salmon are treated like garbage, and at the farms that threaten our fragile coasts. They draw colorful portraits of characters, such as the big salmon farmer who poisoned his own backyard, the fly-fishing activist who risked everything to ban salmon farms in Puget Sound, and the American researcher driven out of Norway for raising the alarm about dangerous contaminants in the fish. Frantz and Collins document how the industrialization of Atlantic salmon threatens this keystone species, endangers our health and environment, and lines the pockets of our generation's version of Big Tobacco. And they show how it doesn't need to be this way.

Just as Eric Schlosser’s Fast Food Nation forced a reckoning with the Big Mac, the vivid stories, scientific research, and high-stakes finance at the heart of Salmon Wars will inspire readers to make choices that protect our health and our planet.

Before leaving journalism for a career as a private investigator specializing in international financial fraud, Catherine Collins was a reporter and foreign correspondent for the Chicago Tribune and a contributor to The New York Times and Los Angeles Times. She has written several nonfiction books with her husband, Douglas Frantz, including The Man from Pakistan and Death on the Black Sea.

Douglas Frantz is a former managing editor of the Los Angeles Times and shared a Pulitzer Prize as a foreign correspondent at The New York Times. After his career in journalism, he was chief investigator for the Senate Foreign Relations Committee, an assistant secretary of state in the Obama administration, and deputy secretary-general at the Organization for Economic Cooperation and Development in Paris. He has written several nonfiction books with his wife, Catherine Collins, including Fallout and Celebration, U.S.A.

Bloomberg: The 10 Best Books for Your Summer Reading List
Literary Hub: 29 Works of Nonfiction You Need to Read This Summer

“This excellent book is buoyed by deft portraits of the important players on either side of the nets—poignantly so in regard to some honest scientists whose careers were derailed by industry attacks—and its final chapters describe some hopeful initiatives now in progress.”
—The Wall Street Journal

“Salmon Wars is a deep dive into the damage caused by current fish-farming methods to ocean environments, wild fish and their habitats, and the farmed fish themselves. It is also an account of the dismal failure of governments to stop such practices. Salmon farming needs reform. Until it gets it, read this book, and you will never eat farmed salmon again.”
—Marion Nestle, professor of nutrition, food studies, and public health, emerita, at New York University and author of What to Eat

“Erin Brockovich meets Wicked Tuna in this searing exposé…. This stellar investigation is the rare one that has the power to impact policymakers and consumers alike.”
—Publishers Weekly (starred review)

“Impressively researched and absorbingly written, Salmon Wars will compel you to think again about the fish you love to eat so often for dinner. Two highly accomplished investigative reporters dig deep into the global industry behind ocean-farmed salmon, laying bare its environmental dangers, dubious health claims, and dismaying success at obstructing effective regulation. Douglas Frantz and Catherine Collins make a powerful case that there are far better options than the ocean cages that supply North Americans with most of their Atlantic Salmon.”
—Martin Baron, former editor of the Washington Post

“We have been growing crops unsustainably on the land for at least 100 years. Now we are making the same mistakes with agriculture in our oceans. The criminal multinational fishing corporations and their complicit politicians are actively harming the marine environment and pushing their toxic product to unaware consumers. After reading Salmon Wars, I doubt you will choose to eat net pen farmed salmon again.”
—Yvon Chouinard, founder of Patagonia

“Leaping and struggling against the current, dodging hungry bears, mature salmon spawn where they themselves hatched, and then they die. That’s the scene hungry shoppers imagine when they buy slabs of glowing pink fish at the local supermarket. But the reality of how that fish actually reached the table contradicts raw nature.”
—Booklist

“From cigarettes being tossed in a salmon pen to dark murky waters filled with litter, this is how America’s favorite fish are being ‘cared for.’ Salmon Wars will open your eyes to cruelty that parallels puppy mills and all the things we, as Americans, stand against. Frantz and Collins have delivered a book that you will not put down—bravo!”
—Allen Ricca, coauthor of Catching Hell: The Insider Story of Seafood from Ocean to Plate

“In this impeccably researched dive into salmon farming, the authors…provide a searing account of toxic industrial practices, health risks and blatant disinformation. Their portrait of chemical-fed, pathogen-ravaged fish caged in pens (usually marketed as ‘organic,’ ‘sustainable’ and ‘naturally raised’) is convincing and devastating.”
—Maclean’s (Canada)