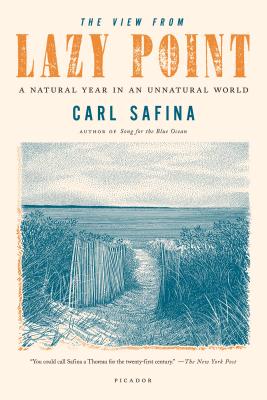 Hailed MacArthur Fellow Carl Safina takes us on a tour of the natural world in the course of a year spent divided between his home on the shore of eastern Long Island and on his travels to the four points of the compass. As he witnesses a natural year in an unnatural world he shows how the problems of the environment are linked to questions of social justice and the politics of greed, and in asking difficult questions about our finite world, his answers provide hope.

Carl Safina's work has been recognized with MacArthur, Pew, and Guggenheim Fellowships, and his writing has won Orion, Lannan, and National Academies literary awards and the John Burroughs, James Beard, and George Rabb medals. He has a PhD in ecology from Rutgers University.

Safina is the inaugural holder of the endowed chair for nature and humanity at Stony Brook University, where he co-chairs the steering committee of the Alan Alda Center for Communicating Science and is founding president of the not-for-profit Safina Center. He hosted the 10-part PBS series Saving the Ocean with Carl Safina. His writing appears in The New York Times, National Geographic, Audubon, Orion, and other periodicals and on the Web at National Geographic News and Views, Huffington Post, and CNN.com.

Carl's books include Voyage of the Turtle, Becoming Wild, and The View from Lazy Point.

“You could call Safina a Thoreau for the twenty-first century.” —New York Post

“Safina's book soars….I had to--and wanted to--read The View from Lazy Point very slowly, allowing myself to digest its wealth of information, to revel in the beauty of Safina's writing, and to absorb fully the implications of his musings….What a pleasure it is to find such an enlightening, provocative companion for walking and talking--and reading. We can ask no more from those who warn about dark days ahead than that they also awaken us to the miracle of everyday life.” —Dominique Browning, The New York Times Book Review

“A call to arms in the cause of hope…Mr. Safina's writing moves easily from revelatory observation sparked by a flash of bird or splash of fish to passionate, lyrical philosophy.” —The Economist

“Before Carl Safina, environmentalists could often be heard wondering where the next Rachel Carson, Aldo Leopold, or Henry Beston might be hiding….The pure sensuous detail, seeing the natural world from a variety of angles, was missing in the generations after Carson and Leopold.” —Newsday