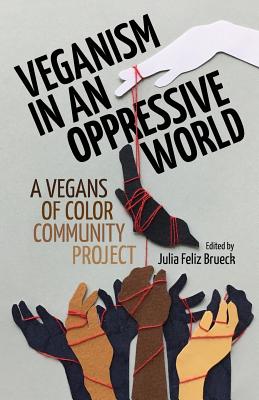 What would it take for veganism to spread further than ever before?

Through the voices of vegans of color, Veganism in an Oppressive World will revolutionize the way you see our movement. A must read for new vegans and seasoned nonhuman animal activists alike, this community-led effort provides in-depth, first-hand accounts and analyses of what is needed to broaden the scope of veganism beyond its current status as a fringe or "single-issue" movement while ensuring that justice for nonhumans remains its central focus.

This collection of academic essays, personal reflections and poetry critically examines the state of the mainstream nonhuman animal rights movement while imparting crucial perspectives on how to build a movement that is inclusive, consistent, and effective.

"Countless folks aren't critical enough about the interconnectedness of oppression and how it impacts marginalized communities as well as other animals (i.e. sexism, racism, classism, etc., which are greatly amplified under capitalism). "Veganism in an Oppressive World" is a must read for anyone committed to doing serious work around the dismantling of speciesism and all other systems of oppression that are inherently at odds with life."- Kevin Tillman, Vegan Hip Hop Movement

"The essays in Veganism in an Oppressive World highlight the challenges faced by vegans of color seeking justice for humans alongside our fellow animals. As a queer black trans vegan activist, I have witnessed racism, sexism, and other oppression in the animal rights movement, which is not only unacceptable in its own right, but also drives away potential allies for the animals. The voices in this book reflect wisdom and insights that white vegans simply do not possess. I recommend this book to all who wish to create a truly inclusive vegan world." -Pax Ahimsa Gethen, photographer, writer, & activist

Julia Feliz Brueck is a decade long vegan, scientist, and published author and illustrator. She is also the founder of Sanctuary Publishers (sanctuarypublishers.com), a vegan book publisher that gives back to marginalized communities with every book sold.