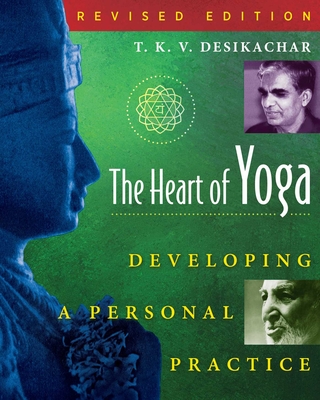 The first yoga text to outline a step-by-step sequence for developing a complete practice according to viniyoga--yoga adapted to the needs of the individual.

• A contemporary classic by a world-renowned teacher.

• This new edition adds thirty-two poems by Krishnamacharya that capture the essence of his teachings.

In The Heart of Yoga Desikachar offers a distillation of his father's system as well as his own practical approach, which he describes as "a program for the spine at every level--physical, mental, and spiritual." This is the first yoga text to outline a step-by-step sequence for developing a complete practice according to the age-old principles of yoga. Desikachar discusses all the elements of yoga--poses and counterposes, conscious breathing, meditation, and philosophy--and shows how the yoga student may develop a practice tailored to his or her current state of health, age, occupation, and lifestyle.

This is a revised edition of The Heart of Yoga.

A structural engineer by training, T. K. V. Desikachar (1938-2016) lived and studied with his father until Krishnamacharya's death in 1989. He devoted his life to yoga instruction for people of all backgrounds and all levels of ability and taught at the school founded in his father's memory in India, the Krishnamacharya Yoga Mandiram, as well as in Europe, the United States, Australia, and New Zealand.

"I can think of no better book to recommend to a friend beginning to be excited by yoga but bewildered by the plethora of different schools and their sometimes-conflicting teachings. In addition, I would be hard-pressed to think of a book I would recommend more highly to any yoga student seeking to deepen a yoga practice . . . The great gift of The Heart of Yoga lies not simply in the depth of Desikachar's learning, but in the compassion, gentleness, practicality, and down-to-earth spirit that permeate the book."
— Yoga Journal

“Read this book from cover to cover and you will begin to understand what yoga is all about.”
— The Sunday Times

“Those who are interested in understanding what yoga is about, those who are looking for a larger context and focus for their hatha practice, those who look to the Yoga Su-tra for guidance, and all those who have loved and benefited from Krishnamacharya and/or Desikachar, directly or indirectly, will want this book.”
— Yoga International

“An invaluable source of information regarding the theory and practice of yoga. A must for students and teachers alike.”
— Indra Devi, author of Yoga for You

“Desikachar speaks from the heart with tenderness as well as an engineer's careful attention to details and individuality.”
— LA Yoga, January 2011