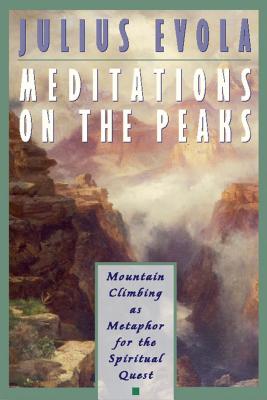 Evola articulates the close relationship between the physical rigors of mountain climbing and the ascent of the initiate toward self-transcendence.
Julius Evola, a leading exponent of esoteric thought, was also an ardent mountain climber who personally scaled the peaks of the Tyrols, Alps, and Dolomites. For Evola the physical conquest of a mountain, with all the courage, self-transcendence and mental lucidity that it entails, becomes an inseparable and complementary part of spiritual awakening. It is no coincidence that many ancient cultures chose mountains as the abodes of their gods and considered the rigorous ascent of peaks as the task of heroes and initiates. In modern times, which tend to suffocate the heroic with naked self interest, the mountain still forms part of the profound dimension of spirit where the soul finds within itself more than what it thought itself to be. In Meditations on the Peaks, Evola combines recollections of his own experiences with reflections on other inspirational men and women who shared his view of the transcendent greatness of mountains.

A controversial philosopher and critic of modern Western civilization, Julius Evola (1898-1974) wrote widely on Eastern religions, alchemy, sexuality, politics, and mythology. Inner Traditions has published his Eros and the Mysteries of Love: The Metaphysics of Sex, The Yoga of Power, The Hermetic Tradition, Revolt Against the Modern World, The Mystery of the Grail and Ride The Tiger.

"Evola writes in lively prose, filled with fascinating and concrete detail...To read his descriptions of the higher spiritual states is like watching a champion mountain-climber on a vertical glacier."
— Joscelyn Godwin in Gnosis

"[Evola's] engaging and poetic look at mountain climbing through the eyes of awareness creates an artistic dance of words and images. Feeling the landscape of both mind and matter, [he] brings deeper meaning to the struggles of everyday life."
— Meditation Pathways