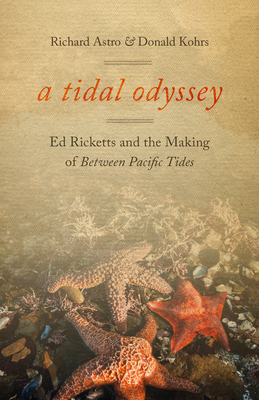 Between Pacific Tides by Edward F. Ricketts and Jack Calvin is arguably the most important book about marine ecology on the Pacific coast of North America. At a time when almost all studies of life in the intertidal zones were taxonomic, Ricketts and Calvin revolutionized the field and helped to lay the groundwork for studies of the impact of environmental change on the natural world. Though Ricketts is perhaps best known as a quirky character in John Steinbeck’s fiction, he was a serious marine biologist who conducted pioneering research.

In A Tidal Odyssey, literary scholar Richard Astro and archivist Donald Kohrs explore how Between Pacific Tides came to be, covering both the writing process and the long journey to publication. They tell three interwoven stories: the development of ecology as a valuable new approach to the study of marine life in the intertidal zone; a case study of how new and dynamic science is published and reaches a larger audience; and the intellectual development of Ed Ricketts.

Not only a scientist but also an expert in music, philosophy, history, and literature, Ricketts and his work impacted a broad range of writers and scholars. A number of these intellectual figures appear in A Tidal Odyssey, including Ricketts’s co-author, Jack Calvin, and illustrator, Ritch Lovejoy; mythologist Joseph Campbell; novelist Henry Miller; composer John Cage; and of course John Steinbeck. The authors have drawn extensively from Ricketts’s archive, including previously unpublished letters, memoranda, notebooks, and photographs.

A Tidal Odyssey is for anyone interested in the world of Ed Ricketts as well as marine biology, intertidal ecology, and how ecological studies underpin our understanding of the impact of environmental change on the well-being of our planet.

RICHARD ASTRO began college at Oregon State University and has been in universities ever since as a graduate student, faculty member, and academic administrator. He is provost emeritus and distinguished professor of English at Drexel University.