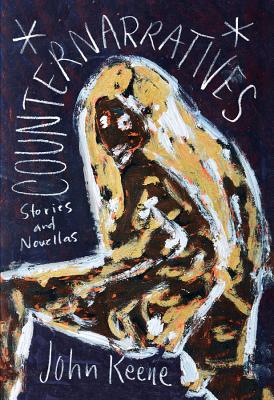 By John Keene
Email or call for price
Out of Print

Conjuring slavery and witchcraft, and with bewitching powers all its own, Counternarratives continually spins history—and storytelling—on its head

Ranging from the 17th century to our current moment, and crossing multiple continents, Counternarratives' stories and novellas draw upon memoirs, newspaper accounts, detective stories, interrogation transcripts, and speculative fiction to create new and strange perspectives on our past and present. “An Outtake” chronicles an escaped slave’s take on liberty and the American Revolution;"The Strange History of Our Lady of the Sorrows" presents a bizarre series of events that unfold in a nineteenth-century Kentucky convent; "The Aeronauts" soars between bustling Philadelphia, still-rustic Washington, and the theater of the U.S. Civil War; “Rivers,” presents a free Jim meeting up decades later with his former raftmate Huckleberry Finn; and in "Acrobatique," the subject of a famous Edgar Degas painting talks back.

John Keene is a former member of the Dark Room Writers Collective, a graduate fellow of Cave Canem, and the recipient of many awards and fellowships—including a MacArthur Genius Award, the Windham-Campbell Prize, and the Whiting Foundation Prize for fiction. Keene teaches at Rutgers.

Counternarratives is an extraordinary work of literature. John Keene is a dense, intricate, and magnificent writer.

Keene’s collection of 13 stories and novellas examines lives marked by the tectonic historical pressures of its five-century scope. Jumping from Reformation-era Brazil to Puritan New England to Langston Hughes’s Harlem, it is that rare book of short fiction with an epic intuition of time, accomplishing in a handful of inspired, intimate portraits what many sagas only manage in reams.
— Julian Lucas - The New York Times

Chronologically arranged but narratively discrete, Keene’s collection of 13 stories and novellas examines lives marked by the tectonic historical pressures of its five-century scope. Jumping from Reformation-era Brazil to Puritan New England to Langston Hughes’s Harlem, it is that rare book of short fiction with an epic intuition of time, accomplishing in a handful of inspired, intimate portraits what many sagas only manage in reams.
— Julian Lucas - The New York Times

Keene exerts superb control over his stories, costuming them in the style of Jorge Luis Borges…Yet he preserves the undercurrent of excitement and pathos that accompanies his characters' persecution and their groping toward freedom.
— Sam Sacks - The Wall Street Journal

We
have become accustomed in recent years to the revisionary spirit of
much postcolonial fiction, but the ambition, erudition and epic sweep of
John Keene’s remarkable new collection of stories, travelling from the
beginnings of modernity to modernism, place it in a class of its own.
His book achieves no less than an imaginative repositioning of the
history of the Americas ... Keene is that rarest of things today, a
writer whose radicalism connects the politics of history to the politics
of fiction.
— Kate Webb - Times Literary Supplement

Exquisite, and unlike anything I’ve ever read.
— Eula Biss

Only a few, John Keene among them, in our age, authentically test the physics of fiction as both provocation and mastery. Continuing what reads like the story collection as freedom project, in Counternarratives, Keene opens swaths of history for readers to more than imagine but to manifest and live in the passionate language of conjure and ritual.

Keene finds inspiration in newspaper clippings, memoirs, and history, and anchors them in the eternal, universal, and mystical.
— Vanity Fair

In Counternarratives, John Keene undertakes a kind of literary counterarchaeology, a series of fictions that challenge our notion of what constitutes "real" or "accurate" history. His writing is at turns playful and erudite, lyric and coldly diagnostic, but always completely absorbing. Counternarratives could easily be compared to Borges or Bolano, Calvino or Kiš, but at the same time it is a deeply American, resolutely contemporary book, that asks us to reconsider our own perspectives on the past—and the future.

Of the scope of William T. Vollmann or Samuel R. Delany, but with a kaleidoscopic intuition all its own, Counternarratives is very easily one of the most vividly imagined and vitally timed books of the year. I haven't felt so refreshed in quite a while as a reader.

Keene opens up the spaces between words and their objects, to create room where fresh meanings can play.
— Ben Ehrenreich - The Nation

Queering the script, defying the imperative to be silent, however, does not require confidence or a vision of what progress means. It is, rather, in all its uncertainty and risk, the most basic stuff of—the very matter of—life. It is also the crowning achievement of one of the year’s very best books.
— Brad Johnson - The Quarterly Conversation

Keene’s collection of short and longer historical fictions are formally varied, mold-breaking, and deeply political. He’s a radical artist working in the most conservative genres, and any search for innovation in this year’s U.S. fiction should start here.
— Christian Lorentzen - Vulture

Counternarratives proffers a series of stories in which religion and spirituality, art and language, violence and subjugation, homosexuality and eroticism, may shine through a panoply of voices.

Practically every sentence in the book perforates, stretches out, or pries open literary modes designed to be airtight, restrictive, and racially exclusionary…An expert generator of suspense, Keene also turns out to be a skilled humorist, a mischievous ironist, a deft, seductive storyteller and a studied historian.
— Max Nelson - Bookforum

Protean in style, erudite in reference, uncanny in effect, these stories and novellas inhabit, conjure, and invent characters written out of history by slavery, racism, and subordination.
— Mark Sussman - Slate