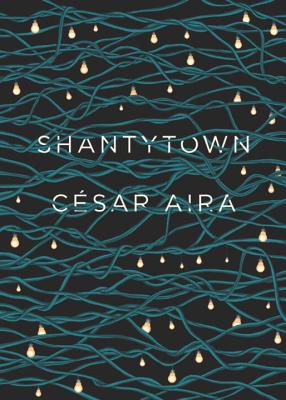 At last, a noir novel from the Argentine master of suspense and surprises

Maxi, a middle-class, directionless ox of a young man who helps the trash pickers of Buenos Aires’s shantytown, attracts the attention of a corrupt, trigger-happy policeman who will use anyone — including two innocent teenage girls — to break a drug ring that he believes is operating within the slum. A strange new drug, a brightly lit carousel of a slum, the kindness of strangers, gunplay... no matter how serious the subject matter, and despite Aira’s “fascination with urban violence and the sinister underside of Latin American politics” (The Millions), Shantytown, like all of Aira’s mesmerizing work, is filled with wonder and mad invention.

CÉSAR AIRA was born in Coronel Pringles, Argentina in 1949, and has lived in Buenos Aires since 1967. He taught at the University of Buenos Aires (about Copi and Rimbaud) and at the University of Rosario (Constructivism and Mallarmé), and has translated and edited books from France, England, Italy, Brazil, Spain, Mexico, and Venezuela. Perhaps one of the most prolific writers in Argentina, and certainly one of the most talked about in Latin America, Aira has published more than 100 books to date in Argentina, Mexico, Colombia, Venezuela, Chile, and Spain, which have been translated for France, Great Britain, Italy, Brazil, Portugal, Greece, Austria, Romania, Russia, and the United States. One novel, La prueba, has been made into a feature film, and How I Became a Nun was chosen as one of Argentina’s ten best books. Besides essays and novels Aira writes regularly for the Spanish newspaper El País. In addition to winning the 2021 Formentor Prize, he has received a Guggenheim scholarship, and was shortlisted for the Rómulo Gallegos prize and the Booker International Prize.

Chris Andrews was born in Newcastle, Australia, in 1962. He studied at the University of Melbourne and taught there, in the French program, from 1995 to 2008. He also taught at the University of Western Sydney, where he was a member of the Writing and Society Research Center. As well as translating nine books by Roberto Bolano and ten books (and counting) by César Aira, he also brought the French author Kaouther Adimi’s Our Riches into English for New Directions. Andrews has won the Valle-Inclán Prize and the French-American Foundation Translation Prize for his translations. Additionally, he has published the critical studies Poetry and Cosmogony: Science in the Writing of Queneau and Ponge and Roberto Bolano's Fiction: An Expanding Universe as well as two collections of poems, Cut Lunch and Lime Green Chair, for which he won the Anthony Hecht Poetry Prize.