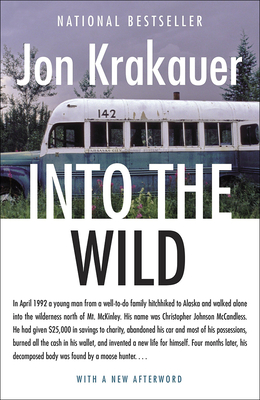 In April 1992 a 24-year-old from the Washington, D.C., suburbs named Chris McCandless walked into the Alaska wilderness below Mt. McKinley with a small-caliber rifle and a 10-pound bag of rice. Four months later, his emaciated corpse was found at his campsite by a moose hunter. How McCandless came to die is the unforgettable story of Into the Wild. Jon Krakauer constructs a clarifying prism through which he reassembles the disquieting facts of McCandless's short life. Admitting an interest that borders on obsession, he searches for the clues to the drives and desires that propelled McCandless. Digging deeply, he takes an inherently compelling mystery and unravels the larger riddles it holds: the profound pull of the American wilderness on our imagination; the allure of high-risk activities to young men of a certain cast of mind; the complex, charged bond between fathers and sons.