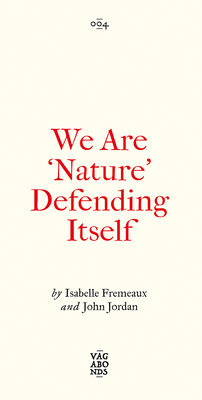 We Are ‘Nature’ Defending Itself tells the rare story of a community successfully standing against the forces of global capitalism. A chronicle of life in a 4,000 acre squat in Western France written by two activists who took part in blocking the construction of an airport, the book provides a blueprint for action against an increasingly rapacious extractivist corporate state and hope for those who value life above illusions of capitalist growth.

In 2008, as the storms of the financial crash blew, Isabelle Fremeaux and Jay Jordan deserted the metropolis and their academic jobs, traveling across Europe in search of post-capitalist utopias. They wanted their art activism to no longer be uprooted.

They arrived at a place French politicians had declared lost to the republic, otherwise know as the zad (the zone to defend): a messy but extraordinary canvas of commoning, illegally occupying 4,000 acres of wetlands where an international airport was planned. In 2018, the 40-year-long struggle snatched an incredible victory, defeating the airport expansion project through a powerful cocktail that merged creation and resistance.

Isabelle Fremeaux is a popular educator and action researcher. She was formerly Senior Lecturer in Media and Cultural Studies at Birkbeck College London. Along with Jay Jordan, she is a coordinator of The Laboratory of Insurrectionary Imagination.

Jay Jordan is co-founder of Reclaim the Streets (1995-2000) and the Clandestine Insurgent Rebel Clown Army, and co-author of We Are Everywhere: The Irresistible Rise of Global Anticapitalism (Verso, 2003) and A User's Guide to Demanding the Impossible (Minor Compositions, 2011). He is a coordinator of The Laboratory of Insurrectionary Imagination.