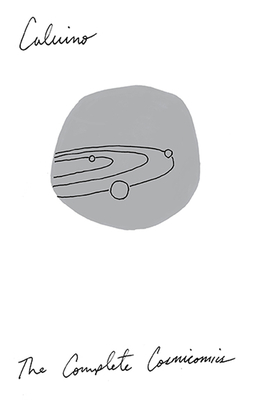 The definitive edition of the cosmicomics, Italo Calvino's short stories explore natural phenomena and the origins of the universe. The Complete Cosmicomics brings together all of these enchanting stories—including some never before translated—in one volume for the first time.

Italo Calvino’s beloved cosmicomics cross planets and traverse galaxies, speed up time or slow it down to the particles of an instant. Through the eyes of an ageless guide named Qfwfq, Calvino explores natural phenomena and tells the story of the origins of the universe. Poignant, fantastical, and wise, these thirty-four dazzling stories—collected here in one definitive anthology—relate complex scientific and mathematical concepts to our everyday world. They are an indelible (and unfailingly delightful) literary achievement.

“Nimble and often hilarious . . . Trying to describe such a diverse and entertaining mix, I have to admit, just as Calvino does so often, that my words fail here, too. There’s no way I — or anyone, really — can muster enough of them to quite capture the magic of these stories . . . Read this book, please.” — Colin Dwyer, NPR

ITALO CALVINO (1923–1985) attained worldwide renown as one of the twentieth century’s greatest storytellers. Born in Cuba, he was raised in San Remo, Italy, and later lived in Turin, Paris, Rome, and elsewhere. Among his many works are Invisible Cities, If on a winter’s night a traveler, The Baron in the Trees, and other novels, as well as numerous collections of fiction, folktales, criticism, and essays. His works have been translated into dozens of languages.

"In story after story, Calvino displays the same singular talent for wresting the profound from the absurd...One of the joys of the collection is the chance to watch his evolution as a writer — from the purebred fantasy of his early years to the brain-wrinkling experiments of his later, more famous novels...A diverse and entertaining mix...Read this book, please." --NPR.org   "A major event in the English language to give even more evidence why the great Italian post-modern master was among the greatest of writers in his sadly truncated lifetime...marvelous, poetic, hilarious, sublime and wholly original tales which could please the brightest and most advanced students of literary post-modernism as well as the brightest and most advanced of pubescent readers...Over the course of years from the time of their invention, the tales first occasioned by 'Cosmicomics' became among the greatest achievements of a writer who couldn’t possibly have been more deserving of our era’s most fabled literary award." --Buffalo News  "Calvino’s stories offer us beauty and hilarity while imparting concepts from the hard sciences...This exuberant and humorous collection will appeal to a cross section of readers, including lovers of speculative fiction, fantasy, and literary fiction." --Library Journal    —