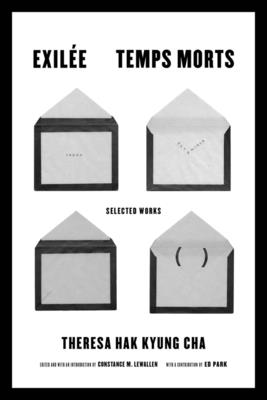 In her radical exploration of cultural and personal identity, the writer and artist Theresa Hak Kyung Cha sought “the roots of language before it is born on the tip of the tongue.” Her first book, the highly original postmodern text Dictee, is now an internationally studied work of autobiography. This volume, spanning the period between 1976 and 1982, brings together Cha’s previously uncollected writings and text-based pieces with images. Exilee and Temps Morts are two related poem sequences that explore themes of language, memory, displacement, and alienation—issues that continue to resonate with artists today. Back in print with a new cover, this stunning selection of Cha’s works gives readers a fuller view of a major figure in late twentieth-century art.

Theresa Hak Kyung Cha (1951–1982) was a poet, filmmaker, and artist who earned her BA and MA in comparative literature and her BA and MFA in art from the University of California, Berkeley.

Constance M. Lewallen is Adjunct Curator at the Berkeley Art Museum and Pacific Film Archive. Among her books are A Rose Has No Teeth: Bruce Nauman in the 1960s and The Dream of the Audience: Theresa Hak Kyung Cha (1951–1982).

"There is a deep pleasure to be found in attending to Cha’s intricate, ever inventive use of sound, punctuation, form, and syntax. It’s painful to think of what else Cha would have done if her life hadn’t been curtailed. Her existing work is so original and wide-ranging that reading it feels like emerging from a tangle into an open glade. What’s here is both not enough and a plenitude."
— New Yorker