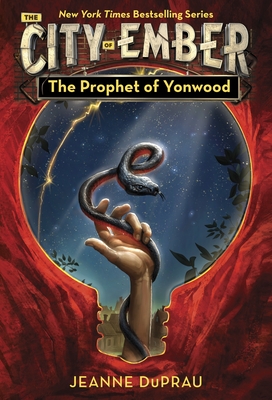 This is book number 4 in the The City of Ember series.

Before there was Ember…there was Yonwood. Discover the prophecy that started it all in this prequel to the The City of Ember—a modern-day classic with over 4 MILLION copies sold!

Nickie will grow up to be one of the first citizens of the city of Ember. But for now, she is a girl who has just moved to the town of Yonwood. There, she discovers a place full of suspicion, where one citizen’s visions of fire and destruction have turned everyone against each other. Eager to take her mind off her father’s absence as he works on a mysterious government project, Nickie reads her great-grandfather’s peculiar journals, spies on a reclusive neighbor who studies the heavens, and meets a strange boy who is fascinated with snakes— all while keeping an eye out for trouble. But is it already too late to avoid a devastating war?
Praise for the City of Ember books: