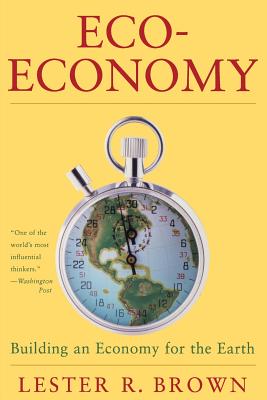 In 1543, Polish astronomer Nicolaus Copernicus challenged the view that the Sun revolved around the Earth, arguing instead that the Earth revolved around the Sun. His paper led to a revolution in thinking—to a new worldview. Eco-Economy discusses the need today for a similar shift in our worldview. The issue now is whether the environment is part of the economy or the economy is part of the environment. Lester R. Brown argues the latter, pointing out that treating the environment as part of the economy has produced an economy that is destroying its natural support systems. Brown notes that if China were to have a car in every garage, American style, it would need 80 million barrels of oil a day—more than the world currently produces. If paper consumption per person in China were to reach the U.S. level, China would need more paper than the world produces. There go the world's forests. If the fossil fuel-based, automobile-centered, throwaway economic model will not work for China, it will not work for the other 3 billion people in the developing world—and it will not work for the rest of the world. But Brown is optimistic as he describes how to restructure the global economy to make it compatible with the Earth's ecosystem so that economic progress can continue. In the new economy, wind farms replace coal mines, hydrogen-powered fuel cells replace internal combustion engines, and cities are designed for people, not cars. Glimpses of the new economy can be seen in the wind farms of Denmark, the solar rooftops of Japan, and the bicycle network of the Netherlands. Eco-Economy is a road map of how to get from here to there.

Lester R. Brown is the founder of the Earth Policy and Worldwatch Institutes. He has been honored with numerous prizes, including a MacArthur Fellowship, the United Nations Environment Prize, and twenty-five honorary degrees. He lives in Washington, D.C.