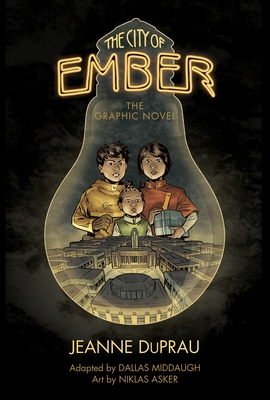 This is book number 1 in the The City of Ember series.

Modern-day classic The City of Ember is a stunning graphic novel! An underground city is doomed to darkness. Then, two kids discover a secret note that may have the answer to bring back the light . . . but is it too late save their home?

As the lights begin to flicker, Lina finds a message from the past that she's sure holds the secret that will save the city. She and her friend Doon must race against time to decipher the message before the lights go out on Ember forever!

When the The City of Ember first came out, it took young readers by storm! It was an instant hit and continues to be read by thousands of kids each month. Still releveant and timely, this graphic novel captures the beauty of Jeanne DuPrau's original vision with artist Niklas Asker who faithfully brings to life the glare of the lamps, the dinginess of the streets, and the brilliance of the first sunrise.

JEANNE DUPRAU is the New York Times bestselling author of the Books of Ember series.

Starred Review, School Library Journal, November 2012:
“­Lina and Doon have spent their entire lives surrounded by darkness. Lina is an optimist and a dreamer who just knows there is something beyond the city of her birth. Doon is much more practical. He knows that if he can just get a good look underground, he can fix the city's constant blackout problem. A chance encounter on Assignment Day allows the two children to meet and exchange jobs, essentially giving the other what they've always wanted. They start to unearth an evil plot by the city's obese and greedy mayor to steal away precious resources from the people who live there. Using clues left behind by Lina's late grandmother, they travel beneath Ember's tunnels in a desperate attempt to find a way out. Based on DuPrau's novel (Random, 2003), the story brings the city of Ember to life using many muted yellows and earth tones. While the interior vantage points from Lina's and Doon's perspectives make Ember's public buildings and homes seem large, advanced exterior shots surrounded entirely in black give readers a sense of just how isolated Ember is. Lina's wonder and Doon's frustration are easily visible through Asker's skill in detailing facial expressions, helping to visually elevate a story literally besieged by shadows. Dystopian stories can be dark, and this one is literally so, but its ultimately hopeful message will resonate.”

Booklist, October 15, 2012:
"The city of Ember, the only light in a vast world of darkness, is dying and two young teens might be the only ones who can find the way out of their darkening town--if they can escape the machinations of a corrupt mayor. DuPrau's well-received dystopian and postapocalyptic middle-grade novel is ably adapted into graphic-novel form by Middaugh and Asker. The result is a streamlined work that moves quickly while retaining the heart of the original story. Readers new and old will appreciate the muted colors of Asker's artwork, which clearly shows the dinginess of Ember and the generic quality of people who have bred past specific races."

Kirkus Reviews, September 1, 2012:
"Effective use of light and shadow in the art give this graphic adaptation of the 2003 novel a properly spooky look. The tale is told in a visual, cinematic way with an admixture of quick reaction shots and wordless action sequences that allow readers to race along almost as fast as they can turn the pages. Asker's penumbral scenes underground and broad, grassy Eden above are strongly atmospheric and depict both settings and the clearly delineated cast (particularly the grossly corpulent Mayor) in tellingly crisp detail."