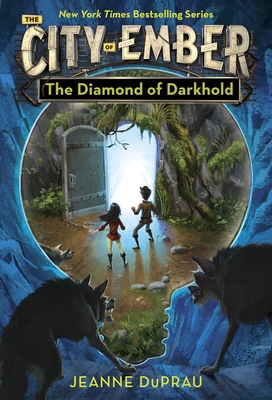 This is book number 3 in the The City of Ember series.

Lina and Doon are returning to the city of Ember, but what awaits them in the dark? This highly acclaimed adventure series is a modern-day classic—with over 4 MILLION copies sold!

Lina and Doon escaped the dying city of Ember and led their people to the town of Sparks. But it’s winter now, and the harsh realities of their new world have begun to set in. When Doon finds a book that hints at an important, long-lost device, it doesn’t take much for him to convince Lina to join him for one last adventure in the place they used to call home. But will this mysterious technology be enough to help their people? And what— and who—will they find when they return?

Praise for the City of Ember books:

Starred Review, Publishers Weekly
"Thanks to full-blooded characters every bit as compelling as the plot, Lina and Doon’s search parallels the universal adolescent quest for answers. An electric debut!"

Starred Review, Kirkus Reviews
"Well-paced, this contains a satisfying mystery, a breathtaking escape over rooftops in darkness, a harrowing journey into the unknown, and cryptic messages for readers to decipher. The likeable protagonists are not only courageous but also believably flawed by human pride. The cliffhanger ending will leave readers clamoring for the next installment."

Starred Review, Voice of Youth Advocates
"While Ember is colorless and dark, the book itself is rich with description. DuPrau uses the puzzle, suspenseful action, and lots of evil characters to entice readers into the story. They will find the teen characters believable and gutsy. Part mystery, part adventure story."

The Horn Book Magazine
"The device of a hidden letter, complete with missing words, is used with such disarming forthrightness that readers will be eagerly deciphering it right alongside Doon and Lina."

An ALA Notable Children’s Book